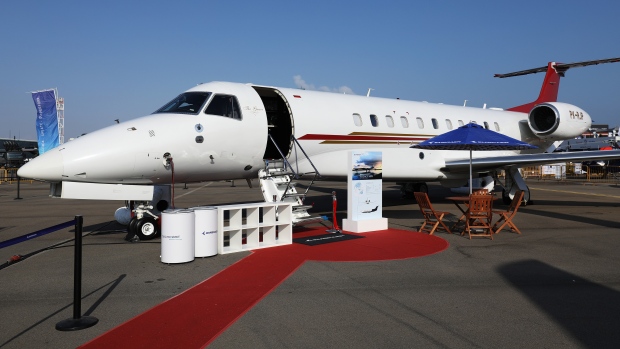 An Embraer SA Legacy 650E jet sits on display during the Singapore Airshow held at the Changi Exhibition Centre in Singapore, on Tuesday, Feb. 6, 2018. , Bloomberg

If anyone’s looking for further evidence of a strong economy, here’s a sign: Wealthy individuals and companies are starting to snap up used private jets before they get too expensive.

Take Steven Myers. A private equity financier and a licensed pilot, Meyers had been patiently looking to buy a jet for years. But when he began noticing a drop in the number of planes for sale a few months ago, he moved quickly to buy a Cessna CJ2. (Meyers wouldn’t say how much he paid, but the 2002 model he bought is listed at about US$2.4 million).

“On this particular airplane,” said Meyers, who run Los Angeles-based Dolphin Capital Holdings Inc., “I probably would have made a worse deal if I had waited.”

The private-jet business collapsed after the 2008 recession as companies scaled back on travel to cut costs. Prices had been driven to astronomical levels in the earlier boom and too many planes were built. When the crash came, pre-owned aircraft lost value at a dizzying pace.

But now buyers are coming out of hiding, encouraged by expanding businesses and lower corporate tax rates. It hasn’t hurt that President Donald Trump, long synonymous with luxury private jets, is seen as someone friendly to the industry. Barack Obama had often criticized private-air travel, helping keep the small-jet industry in a longer funk than other high-end segments of the economy such as watches and sports cars.

Prices remain depressed from the heady days, for sure, but no longer are planes with for-sale signs lingering for months. Used-jet buyers are gripped with a sense of urgency not seen since before the financial meltdown.

In April, the average asking price for pre-owned jets, from small to large, rose 1.5 per cent from the previous month to US$9.7 million, according to JPMorgan Chase. Still, used-jet prices are down 25 per cent since the third quarter of 2015, the report said.

“What we’re left with now is very light amount of inventory in the pre-owned sector of quality, late-model business jets,” said Joe Carfagna Jr., president of aircraft brokerage Leading Edge Aviation Solutions. “It shifted from a buyer’s market to a seller’s market around the end of the year.”

That can be seen in the number of used planes up for sale. It’s now 9.3 per cent of the current fleet, the lowest level in about 15 years. Back in 2009, it peaked at 17 per cent, said Rolland Vincent, who provides a widely read market analysis called JetNet iQ.

In turn, depreciation has slowed considerably. During the recession, used-plane prices were dropping as much as 6 percent each quarter, said Jay Mesinger, chief executive officer of Mesinger Jet Sales. Well-maintained aircraft are now depreciating at a more normal rate of about 1 to 2 per cent each quarter.

“That’s healthy, that’s sustainable,” he said. “That’s what a piece of equipment should do.”

The uptick is a relief for business-jet makers, such as Bombardier Inc., Embraer SA and Dassault Aviation SA. They had cut production rates and offered discounts to curb a glut of aircraft. New-jet deliveries plummeted to 874 in 2009 from a record 1,317 the year before. While sales remain weak, at 676 jets last year, the dearth of inexpensive near-new aircraft is beginning to drive buyers to purchase new planes, brokers and analysts said.

“We’re certainly seeing less competition from the used side,” Scott Donnelly, chief executive officer of Textron Inc., the maker of Cessna jets, said in a conference call with analysts in April. “There’s certainly not the number of them out there that created some of the issues for us on new aircraft sales in the past.”

Manufacturers aren’t out of the woods, still selling planes at discounts to list prices, Vincent said. Bombardier is protecting its turf in the midsize jet market from new planes such as Textron’s Cessna Longitude and Embraer’s Legacy 500, he said. The Longitude has a list price of US$24 million and the Legacy 500 goes for US$20 million, according to a Business & Commercial Aviation guide. A new Gulfstream G650, made by General Dynamics Corp. and currently the largest private jet, lists for US$69.4 million.

But the recovery this year seems more solid, said Chad Anderson, president of Jetcraft, a private-jet broker. For one thing, aircraft makers have been vigilant to block speculators, who had bought planes to sell later at a higher price, from artificially driving up backlogs, he said.

“The last run-up was so extraordinary that it was unsustainable,” Anderson said. “I think we have legs here for the foreseeable future.”