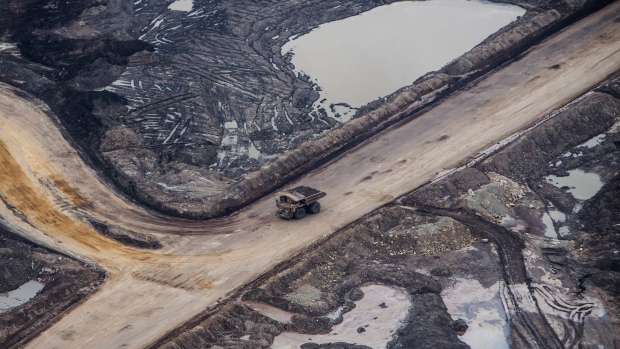 A heavy hauler truck drives through the Suncor Energy Inc. Millennium mine in this aerial photograph taken above the Athabasca oil sands near Fort McMurray, Alberta, Canada, on Monday, Sept. 10, 2018. While the upfront spending on a mine tends to be costlier than developing more common oil-sands wells, their decades-long lifespans can make them lucrative in the future for companies willing to wait. Photographer: Ben Nelms/Bloomberg , Bloomberg

(Bloomberg) -- Canadian crude producer Athabasca Oil Co. may beat an alliance of the country’s largest energy companies in rolling out carbon capture and storage in the oil sands.

Athabasca, Canada’s 10th largest oil producer, has partnered with Entropy Inc. to build a carbon capture and storage facility at its Leismer oil sands site and plans to go ahead with the project next year, it said in its capital budget released Wednesday. The development is being funded by Entropy and will be built in as part of an expansion of Leismer oil sands well site in Alberta. It’s part of Athabasca’s plans to reduce emissions intensity by 30% by 2025.

It’s on track to happen ahead of projects by the Pathways Alliance — made up of the largest oil sands producers including Suncor Energy Inc., Cenovus Energy Inc., and Canadian Natural Resources Ltd. Alliance members plan to invest C$24 billion ($17.6 billion) by 2030 to cut emissions, mostly through carbon capture and storage.

The Pathway members propose building carbon capture facilities at their oil sands sites as well as a pipeline to Cold Lake, Alberta, for sequestration underground. But discussions with the provincial and federal government - Ottawa has indicated it will offer 50% tax credits - are ongoing and will extend into next year, Alex Pourbaix, Cenovus chief executive, said last month.