Conservatives caution Bank of Canada is becoming 'ATM for Trudeau'

Lawmaker Pierre Poilievre, chief Conservative spokesman on finance issues, said the bank “should not be an ATM for Trudeau’s insatiable spending appetites.” He raised concerns about the long-term impacts of monetary expansion and urged Governor Tiff Macklem to steer clear of “ideological” debates.

Since COVID-19 hit, the central bank has purchased C$168 billion (US$128 billion) in government bonds, marking its first foray into what’s known as quantitative easing.

Poilievre’s comments highlight the political minefield Macklem is navigating as his central bank becomes primary financier of Trudeau’s massive budget deficits. The longer the Bank of Canada buys up the debt, or advocates for continued spending as it has done, the deeper it will be dragged into debates about government priorities. 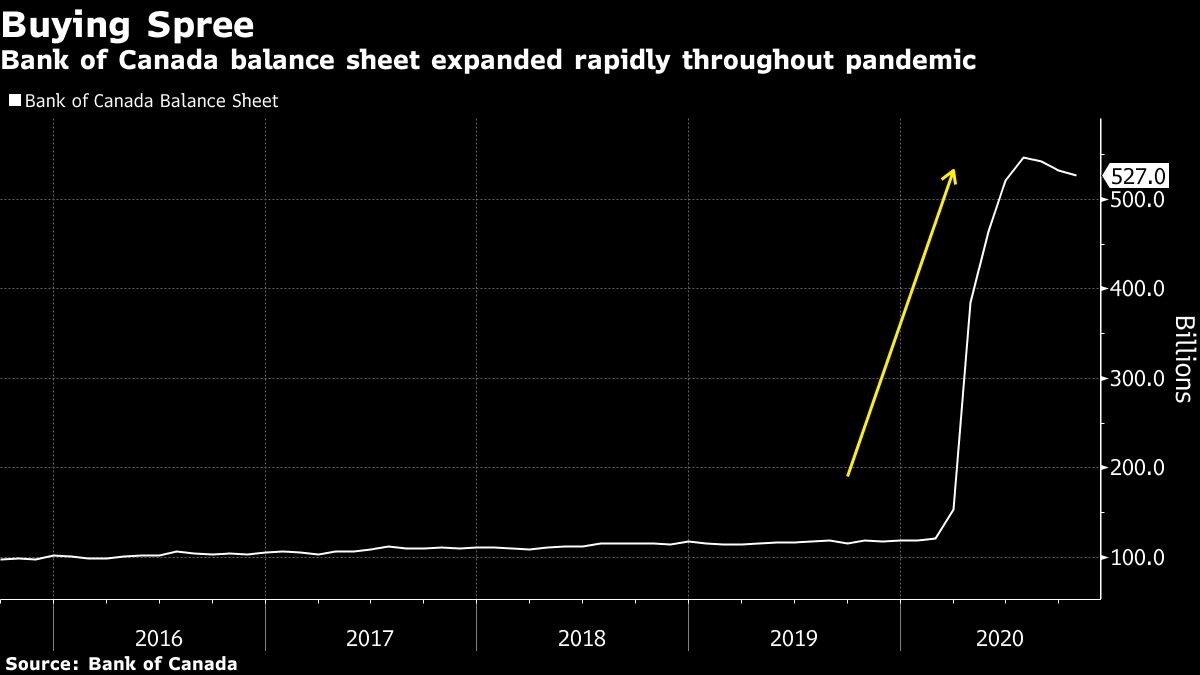 It’s a precarious position for an institution that enjoys a long history of independence and is rarely subject to political attack.

The Bank of Canada has been forced into buying up government debt to prevent a pick-up in interest rates that would cripple the economy. Its primary purpose isn’t to fund the government but to ensure a strong recovery, guided by its 2 per cent inflation target. Theoretically, those bond holdings could be shed once the economy recovers.

“I don’t think we’re at a point, and I don’t anticipate we’ll be at a point, where there is the question about central bank credibility,” Jean-Francois Perrault, chief economist at Bank of Nova Scotia, told BNN Bloomberg television Thursday. “The central bank is independent by law, they have a very specific objective -- to target inflation -- and I think the governor has made it very, very clear that that’s sacrosanct.”

On the fiscal side, there’s broad consensus among political parties in Canada that massive government spending is needed through the pandemic. But there are divisions over the next steps.

Trudeau -- who lost his legislative majority in last year’s election -- has been hinting he wants to keep the fiscal taps open into the recovery. He kicked off a new parliamentary session in September by pledging to pursue a far-reaching and potentially expensive post-pandemic agenda that includes a national daycare system, pharmacare and more spending on affordable housing and the environment.

That won support from the left-leaning New Democratic Party, staving off another election for now. But the Conservatives, who are enjoying a bump in the polls under a new leader, are pushing back against Trudeau’s long-term vision.

“The world is completely revolutionized, so we’re told, and so the logic goes that governments can just print money to pay their bills and there’ll be no consequences,” Poilievre said. “It’s insane.”

He also said the Bank of Canada should “stay out of political and ideological debates and stick to its job, which is inflation targeting.”

Trudeau’s government hit back Thursday, saying Poilievre is heading down a perilous path.

“The Conservatives are recklessly politicizing the role of the independent and widely respected Bank of Canada,” Katherine Cuplinskas, press secretary for Finance Minister Chrystia Freeland, said by email. “Our Liberal government’s commitment is to do whatever it takes to keep Canadians safe and healthy and to protect our economy during this global pandemic.”

While the Bank of Canada is not alone in buying up government debt, it’s been one of the more aggressive central banks this year -- growing its balance sheet as a share of gross domestic product more rapidly than the U.S. Federal Reserve. That’s in part because of faster growing deficits in Canada.

Canadian government budget shortfalls -- including provinces -- will end 2020 at near 20 per cent of GDP, from near balance before the crisis, according to the International Monetary Fund. That represents the fourth highest projected deficit in the world, after Libya, Aruba and the Maldives.

Monetary policy makers led by Macklem, meanwhile, have pledged to continue buying bonds until the economic recovery is “well underway.”

At the current pace, the central bank will control 56 per cent of Canada’s government bond market by the end of next year, from 29 per cent today, according to estimates from Ian Pollick, head of fixed income, currency and commodity research at Canadian Imperial Bank of Commerce. 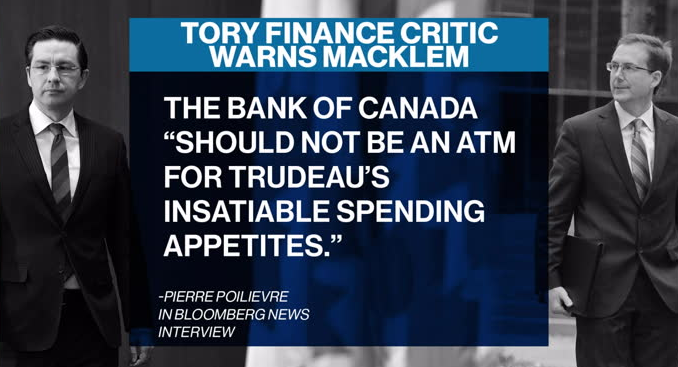 ‘Out of Thin Air’

Poilievre said creating “currency out of thin air” is a recipe for higher inflation and a weakening Canadian dollar. It also fuels inequalities as low interest rates drive up asset values for the rich.

“Expanding the bank’s balance sheet during a short-term, once-in-a-lifetime pandemic lockdown is different than perpetually buying and inflating the financial assets of the wealthy at everyone else’s expense,” Poilievre said.

While the Bank of Canada is operationally independent, the government does reset its mandate every five years and opposition lawmakers have some oversight responsibilities through parliamentary committees. The central bank has been mandated to target inflation at around 2 per cent for almost three decades.

Even with extraordinary pandemic measures, the Bank of Canada isn’t projecting any major pick-up in consumer prices. Rather, it’s projecting inflation will remain below target over the next couple of years because the economy is operating with excess capacity, necessitating the monetary stimulus. 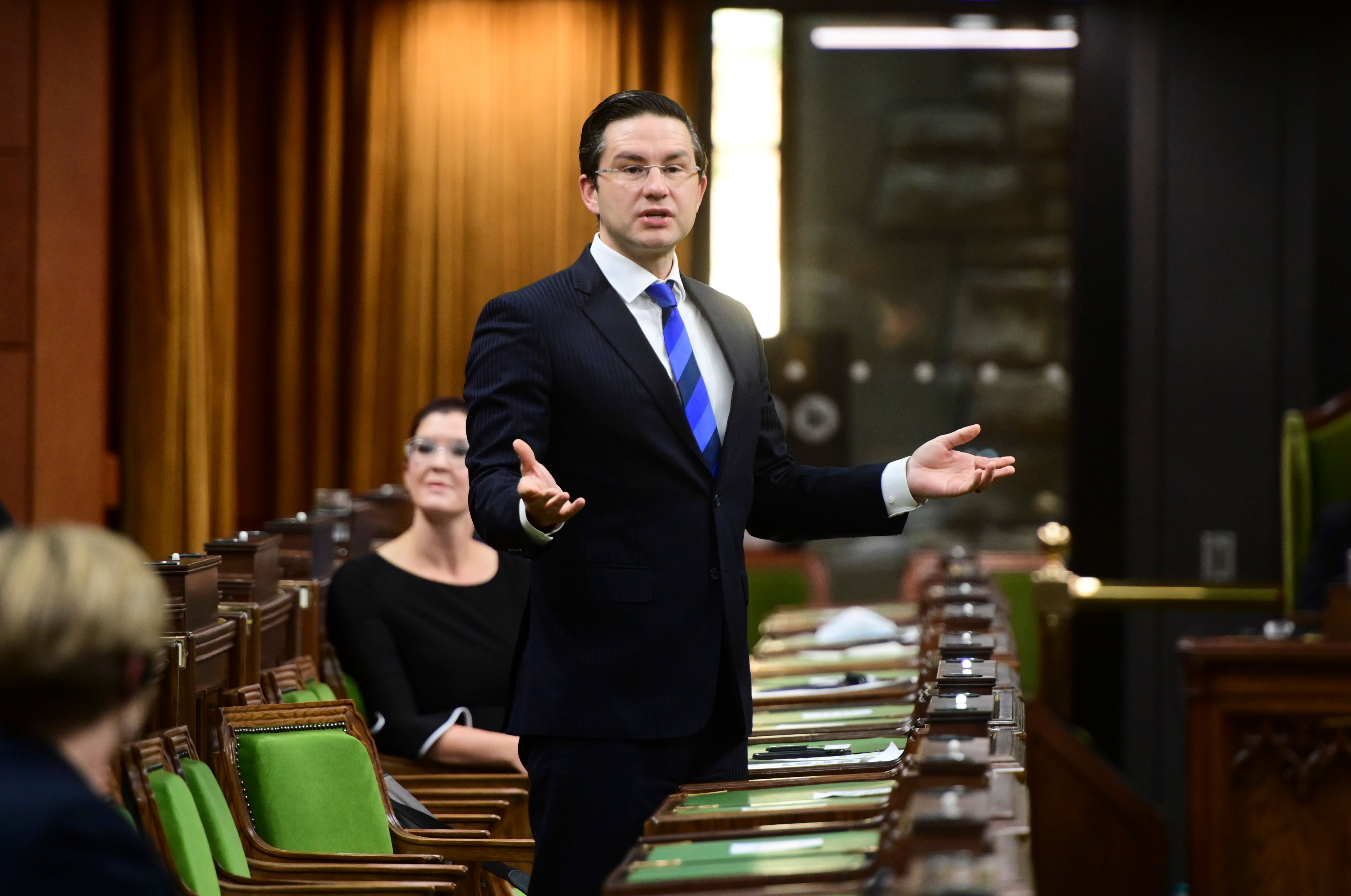 Do you think it’s appropriate for Pierre Poilievre to speak out on Bank of Canada asset purchases?