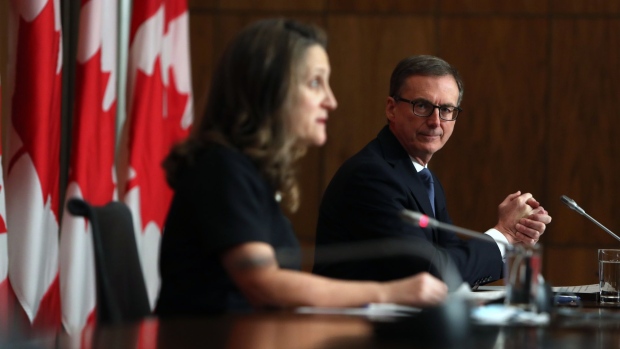 Tiff Macklem, governor of the Bank of Canada, listens during a news conference with Chrystia Freeland, Canada's deputy prime minister and finance minister, in Ottawa, Ontario, Canada, on Monday, Dec. 13, 2021. The Bank of Canada will maintain its 2% inflation target for the next five years, but has formally been given license to moderately overshoot it to "support maximum sustainable employment." , Bloomberg

(Bloomberg) -- The Bank of Canada will soon be allowed to retain some of its earnings to offset financial losses, which could persist for years as the central bank raises rates and reverses its early-pandemic emergency programs, Governor Tiff Macklem said.

The government plans to amend legislation to “allow, on a temporary basis, the Bank of Canada to retain earnings, rather than remit them to the government, for the purpose of covering losses,” Macklem told reporters in a press conference Wednesday. “We will likely have a period of couple of years of negative net income before our income reverses back to our normal positive state.”

The Bank of Canada in 2020 joined other central banks in starting a range of bond-purchase programs to shore up financial markets as the pandemic prompted investors to dump assets. As inflation picked up in the following years, monetary policy authorities reversed some of those measures and raised interest rates. For the Bank of Canada, the about-face means it’s now paying more on settlement balances than it’s receiving on its assets.

The Bank of Canada posted a comprehensive loss of C$522 million ($390 million) in the three months ended Sept. 30, compared with income of C$697 million a year earlier, according to its latest quarterly results.

“This is a good solution,” Macklem said of the potential legislative change. “It will give us all the tools we need.”

--With assistance from Brian Platt.