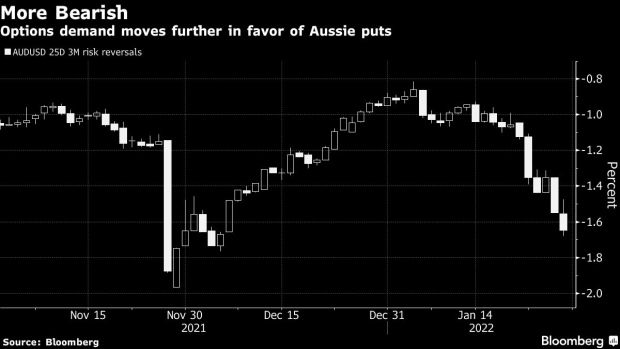 (Bloomberg) -- After a painful start to 2022, the options market points to even tougher days ahead for the Australian dollar.

A measure of put-and-call-option demand is flashing more bearish signals across tenors for the embattled currency, even as the Reserve Bank of Australia is expected to end its asset-purchase program at a meeting next week.

Rising commodity prices -- usually a boon for the currency -- are providing no relief.

Money markets expect the central bank to begin lift-off in the first half of the year, and are currently pricing 125 basis points of hikes by end-2022.

The Aussie’s woes aren’t unique: All Group-of-10 currencies down against the U.S. dollar in 2022, although the Australian exchange rate ranks as the third-worst performer. The greenback has surged near a 18-month high on rising expectations of Federal Reserve hawkishness.

The Aussie’s slide continued on Friday to its lowest level in 18 months after having already dropped about 3.8% against the U.S. dollar so far this year. That’s even as the Bloomberg Commodity Index rises 8.5% in January to a seven-year high.

“The RBA will need to reflect better-than-expected outcomes on inflation and employment in its forecasts, announce the end of QE, and update its forward guidance on rates to perhaps remove both the reference to ‘low underlying inflation’ and remaining ‘patient,’” strategists including Tony Morriss wrote in a note Friday.

They recommend buying the Aussie versus its New Zealand counterpart, as the former benefits more from renewed Chinese stimulus while the kiwi is vulnerable if the central bank under-delivers on hawkish market expectations.