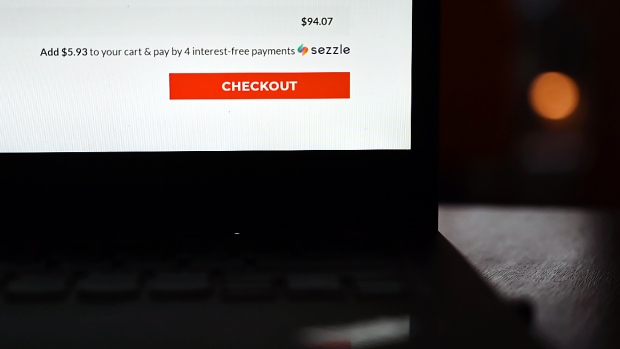 A Sezzle logo is shown in a person's online shopping cart on a laptop in Vernon, B.C. on Wednesday, November 18, 2020. , The Canadian Press

These new services focus on nominal purchases and allow consumers to pay in instalments, sometimes interest-free -- which can be enticing for Canadians who are low on cash during the COVID-19 pandemic.

However the options are not without their pitfalls.

After a qualifying process, the services allow shoppers to pay for their purchases in small increments spread out over weeks or months and sometimes offer access to a tracking portal where they can adjust their payments if unforeseen circumstances come up.

Some, like Afterpay, make most of their revenue from retailers and don't charge fees or interest to shoppers, but experts advise against them because they often encourage consumers to spend beyond their means.

“The thing that can really get you in trouble is thinking of it as 'oh $20 here, $60 there is not a big deal,' but those little purchases can add up really quick,” said Julia Faletski, a Vancouver-based financial adviser at CI Direct Investing.

“You just don't want to get yourself in this situation where that leather jacket is the thing that sinks your finances.”

However, despite the danger of getting too deep in debt, the services do have their upsides, she said.

For example, if you agree to zero per cent interest rates or rates that are lower than your credit card and can pay something off speedily, then the services can work for you.

Laura Nadler, the chief financial officer of AfterPay U.S., said her company's service is ideal for consumers who want to stagger payments to line up with a budget or match when a bi-weekly paycheck comes in.

AfterPay's offering, she said, is also good for people who don't want to take out a traditional loan or pay upfront fees or interest.

When deciding whether to use a pay now, buy later service for a nominal purchase, think about it in steps, said Chantel Chapman, a Vancouver-based financial literacy consultant behind the What The Finances education business.

The first step is to ask yourself why there is so much urgency to purchase something. A lot of people spend to avoid emotions like boredom, pain or feelings of inadequacy, which can be handled in more healthy and alternative ways, she said.

The second step is to think about why you're considering a plan.

“You may feel a sense of shame for spending that much money on yourself and it feels less painful to spread it out over four months, so that's something to look out for,”' said Chapman.

The last step is to think about what you're getting yourself into.

Buy now, pay later plans can be difficult to understand and carry a mental cost because you're suddenly adding an extra and recurring payment to your monthly budgeting, she said.

The plans can become a bad deal if you've overextended yourself by too much, have no prospect of being able to afford whatever you're buying or haven't looked closely at the terms.

“Make sure that you have a really clear idea of what you owe and...make sure that you abide by the payment schedule because if you fall behind, this is where the penalties really become significant,” said Faletski.

AfterPay's Nadler said more than 90 per cent of its customers pay on time and those who don't are prevented from purchasing more items.

However, Faletski warned that users of buy now, pay later services who aren't careful can rapidly see their credit score take a hit and end up with even more debt to pay off.

If you end up in that situation, Chapman said it's often time to turn to credit counselling or professionals to help put together a plan for recovery.

The bottom line, she said, is that you should think long and hard when mulling buy now, pay later plans and don't ignore the red flags.

“If you're in a situation where you only have this small amount of money...or if you don't even have any money to pay for this stuff...you should not.be using these payment plans.”