With Tesla Inc. leading another selloff in momentum darlings amid rising bond yields, some investors are fearful that this means the 11-month bull market is in trouble.

The spike in yields in the past week has certainly rattled nerves across assets. At the stock market’s fringe, where signs of excess have become obvious, investors are bailing. Tesla was down more than 10 per cent as of 10 a.m. in New York after an 8.6 per cent drop Monday. Bitcoin tumbled as much as 18 per cent.

Viewed more broadly, though, rates remain relatively low. When compared to measures of earnings yields, equities still offer a premium almost four times bigger than the historic average. If anything, earnings may be set to explode as economists up and down Wall Street boost their economic growth forecasts to heights not seen in decades. That would justify stock valuations that by some traditional measures look stretched.

The bulls’ case for stocks in a period of rising rates is that the bond selloff is caused by signals emanating from commodities markets and economic data like retail sales. The Biden administration is poised to pass a massive spending bill and Federal Reserve Chair Jerome Powell, who testifies before Congress Tuesday, is committed to keeping short-term rates pinned near zero.

“When we look at the landscape today, rates are going up for the right reasons,” said Peter Mallouk, chief executive officer of Creative Planning. Though some think that the market has to come down since it’s trading at the upper end of valuations, he said, “the reality is, it can stay high while earnings grow into it.” 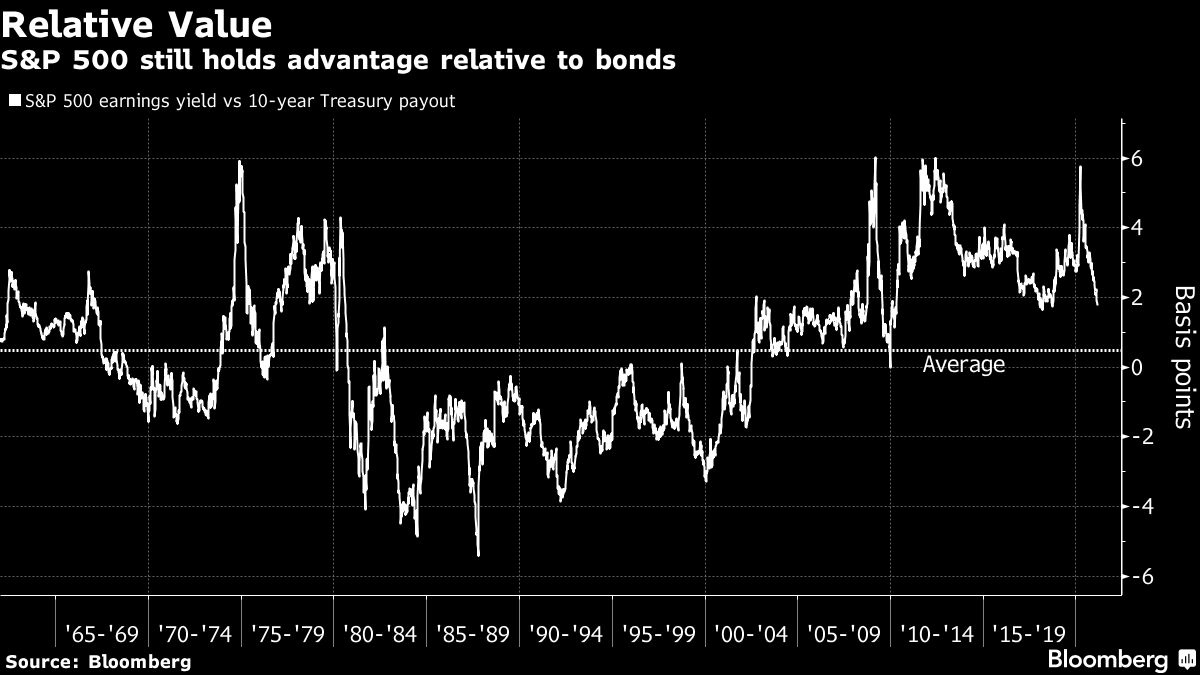 The stocks under the most pressure this week own sky-high valuations that become harder to justify as Treasury yields surge. And a valuation methodology sometimes called the Fed model that compares corporate profits to bond rates has started to move against bulls. Right now, the S&P 500’s earnings yield -- how much profits you get relative to share prices -- is about 1.79 percentage points above the yield on 10-year Treasuries, the smallest advantage since September 2018.

But any warning flashing from that metric is dim. The current premium is still way above the average of 48 basis points in Bloomberg data going back to 1962. That means, all else equal, that equities can still be framed as being attractive relative to history when 10-year yields stay below 2.67 per cent. Yields recently sat near 1.36 per cent.

In a note published earlier this month, Goldman Sachs Group Inc. strategists including Ryan Hammond and David Kostin said that equities are usually able to digest gradual increases in interest rates, especially when driven by growth rather than Fed policy. What tends to cause equity turmoil are sharp increases. Stocks typically fall on average in a given month when rates increase by two or more standard deviations, which is 36 basis points in today’s terms. Yields have gone up 30 basis points this month, reaching a 12-month high.

“While interest rates may have risen under the tailwind of upward revisions to both growth and inflation, both of these variables tend to also be positive for equities -- to a point,” Nixon said. “It is only when rates rise in a disorderly fashion that risk-asset markets react negatively.”

Still, anyone who’s nervous that stocks have gone ahead of fundamentals can take comfort in the latest run-up in yields. In August, when the S&P 500 fully recovered from the losses during the 2020 bear market, 10-year yields were sending an ominous signal with a drop to record lows. In a way, the catch-up in yields indicates that the bond market is finally endorsing the bullish economic message that stocks have been flashing since last March. 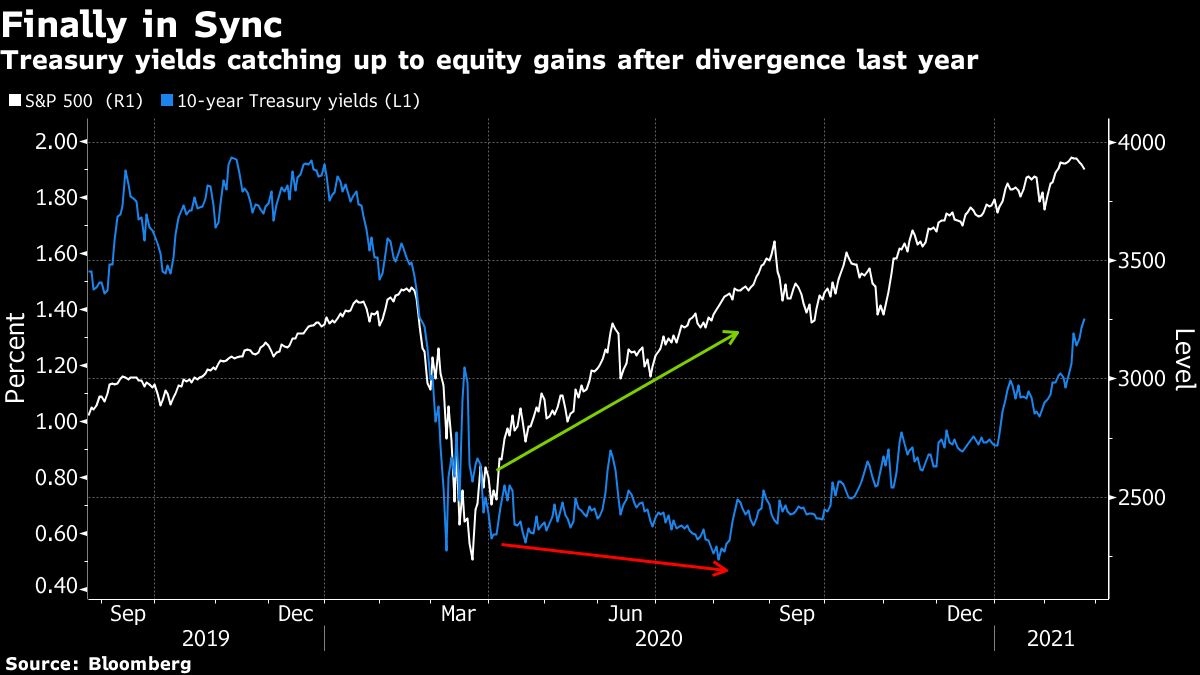 Another way to look at it: Stocks do look extremely stretched based on reported earnings for the past 12 months that included the pandemic recession. On that metric, the S&P 500’s price-earnings multiple sat at 32, eclipsing the peak level seen during the dot-com era.

The value case gets a bit more encouraging when measured against this year’s earnings. With analysts expecting profits to jump 23 per cent to US$171 a share, the P/E ratio comes down to 23.

Should companies continue to beat estimates by a big margin, the picture would get even better. Fourth-quarter profits came in 16 per cent higher than expected, a pace of positive surprises that if sustained would push 2021 earnings to US$198 a share. That’d yield a multiple of 20. 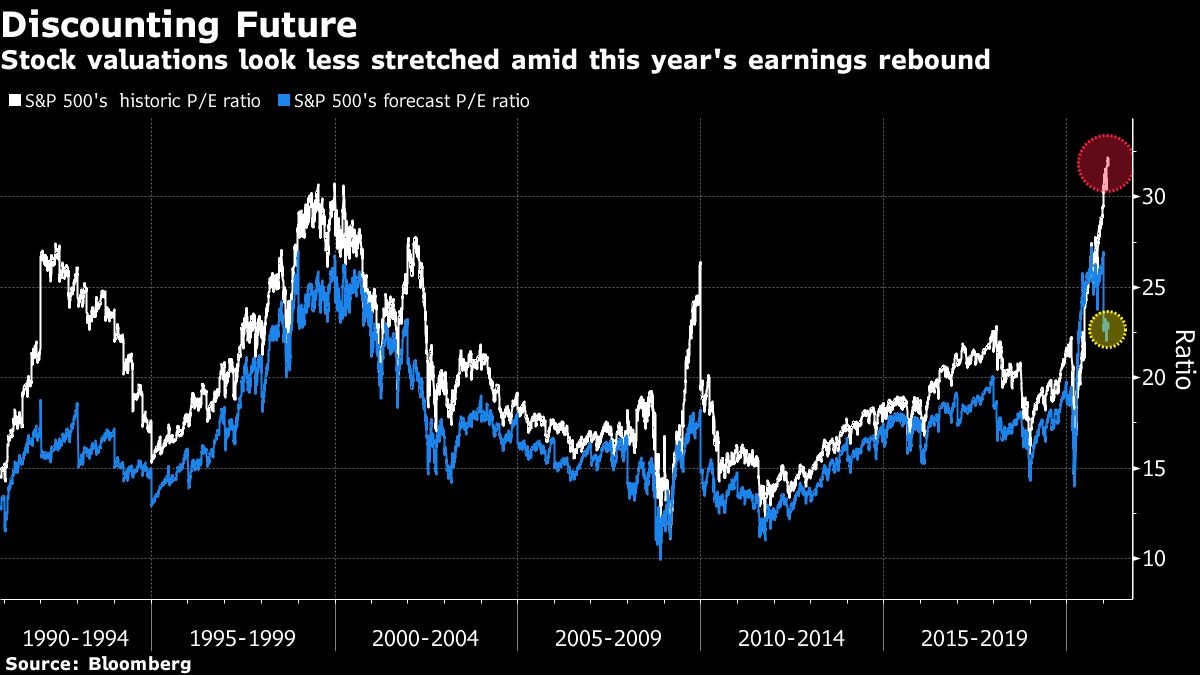 “What seem like very lofty U.S. stock valuations are defensible if (and only if) earnings bounce back strongly in the second half of the year,” Nicholas Colas, co-founder of DataTrek Research, wrote in a recent note. “There are certainly micro-bubbles (some SPACs, IPOs), but there’s also a good case that stocks as a whole can and will earn their way into lofty valuations.”

That’s not to say yields don’t matter for stocks right now. Money quickly moved out of highly-valued stocks such as Tesla, with the Nasdaq 100 falling for a sixth day, the longest losing streak since August 2019. At the same time, companies seen benefiting from an economic recovery delivered gains fared better.

“Investors are not positioning in areas like financials and energy that are really the beneficiaries of things like rising yields, rising commodity prices. I think there is a little scramble,” Lori Calvasina, head of U.S. equity strategy at RBC Capital Markets, said in an interview on Bloomberg Television. “It’s more of a story of repositioning within U.S. equities, as opposed to getting out of U.S. equities.”