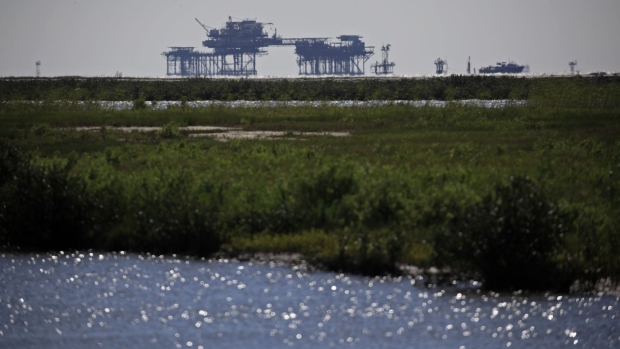 Offshore oil well platforms in the Gulf of Mexico off Port Fourchon, Louisiana, U.S., on Wednesday, April 21, 2021. Offshore rig utilization is starting to respond to the recovery in oil prices, though day rates haven't shown much improvement, and likely won't until usage moves closer to 80-90%. Photographer: Luke Sharrett/Bloomberg , Bloomberg

(Bloomberg) -- The Biden administration is proposing selling new oil and gas drilling leases in the Gulf of Mexico and Alaska in a move likely to anger climate activists pushing to see a domestic ramp down for fossil fuels.

The Interior Department is proposing as many as 11 lease sales over the next five years, according to draft five-year plan made public Friday. They include 10 in the Gulf of Mexico and one in the Cook Inlet off the Alaskan coast. Similar to the previous drilling plan, the proposal bars new leases off both the Atlantic and Pacific coasts.

“From Day One, President Biden and I have made clear our commitment to transition to a clean energy economy,” Interior Secretary Deb Haaland said in a statement. “Today, we put forward an opportunity for the American people to consider and provide input on the future of offshore oil and gas leasing.”

The proposal is only an initial step in the process, with several months of public comment and other reviews before it could be finalized. And the final program might not actually authorize any sales. Under federal law, auctions of offshore oil and gas drilling rights can only be held under the formal five-year plans. The current five-year plan expired Thursday.