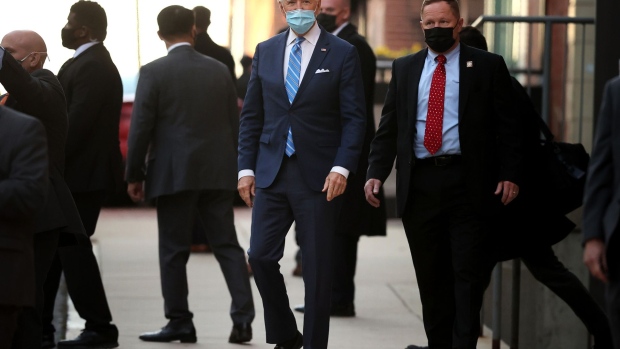 (Bloomberg) -- Joe Biden will be one formal step closer to the presidency after Tuesday’s deadline for states to certify their slates of electors to the Electoral College -- locking in the names of the people who will formally vote to make Biden the president.

Once that happens, there’s little turning back. Congress must by law accept those electors if there’s no outstanding litigation, and President Donald Trump’s legal challenges have even less hope of changing the outcome. Electors meet in each state on Dec. 14 to officially cast their votes.

All of the battleground states where Trump tried to contest the results have certified their presidential election tallies and appointed their electors for Biden, and he has more than the 270 Electoral College votes needed. Only Colorado and Hawaii are left to certify their results among the states Biden won but even they cannot change the outcome.

Federal law says that if a state appoints its electors and all litigation is resolved by Dec. 8 -- the so-called safe harbor deadline -- Congress must consider them “conclusive” when it meets in a joint session on Jan. 6 to tally the votes.

Normally, the deadline passes without much notice. But this year, Trump has refused to concede despite Biden’s clear victory with 306 Electoral College votes, the same as Trump had in 2016. Trump and his allies have claimed, without evidence, that the election was “rigged” and that he actually won.

There is still pending litigation in Wisconsin and some other states, but the Biden electors are valid even if the lawsuits aren’t resolved until after the safe harbor deadline, said Edward Foley, a professor and director of an election-law program at Ohio State University, who has studied disputed elections.

As long as there is only one submission of electoral votes from a state, Congress must accept it unless it’s rejected by both chambers -- which isn’t going to happen, Foley said. Congress can still accept a submission that lacks safe harbor status, he said.

“They won’t jeopardize Biden’s inauguration, and they’re not going to jeopardize the ability of the electors to meet and cast their vote,” Foley said of the outstanding suits.

Lawsuits filed by the Trump campaign, led by his lawyers Rudy Giuliani and Jenna Ellis, plus cases brought by Republican groups have largely been rejected for a lack of evidence. They include challenges to the results in Arizona and Nevada.

The president’s campaign and his allies are 1-49 in post-election litigation, according to a count from Democratic lawyer Marc Elias, and many legal experts don’t expect litigation will overturn results -- especially now that they have been certified in the contested battleground states.Even so, several election lawsuits are outstanding and continue to be filed. In Wisconsin, Trump’s campaign refiled a complaint in state court on Monday over vote tallies in two heavily Democratic counties -- days after the state’s Supreme Court rejected the president’s attempt to take his challenge over mail-in ballots directly to that court.Republican-led challenges in Pennsylvania state court are further along but have failed to gain traction. And two federal lawsuits seeking to de-certify Biden’s wins in Michigan and Georgia, filed by former Trump campaign lawyer Sidney Powell, fizzled on Monday.

Sidney Powell’s ‘Kraken’ Suits Fail in Michigan and GeorgiaPennsylvania Republicans, led by U.S. Representative Mike Kelly have made a long-shot request to the U.S. Supreme Court for an emergency order to nullify the commonwealth’s vote certification on grounds the law the Republican-controlled legislature passed in 2019 to expand mail-in voting is unconstitutional.Justice Samuel Alito has asked for responses to be filed by Tuesday’s safe harbor deadline, moving up his original deadline by one day. In the Bush v. Gore case from Florida that decided the 2000 presidential election, the court made a point of ruling by the safe harbor deadline that year.Republicans have also asked the high court to rule on a Republican lawsuit challenging the commonwealth allowing ballots mailed before Election Day and received within three days after to be counted. But the court hasn’t said whether it would take that case, and it only involves about 10,000 ballots -- not enough to affect Biden’s winning margin of more than 80,000 votes.

Giuliani and Ellis have also been meeting with Republican lawmakers in the contested battleground states encouraging them to ignore the vote totals for Biden on grounds the election has “failed” and to appoint electors for Trump who would compete with the Biden slates.

When U.S. voters mark ballots in a presidential race, they’re actually voting for a candidate’s slate of electors who cast that state’s number of electoral votes for the winning candidate. The candidate who gets at least 270 Electoral College votes wins the presidency.

Republican leaders in Pennsylvania, Arizona, Georgia and Michigan have said it would be illegal for them to ignore the outcome of the Nov. 3 election in their states. A Dec. 3 statement from the four GOP legislative leaders in Pennsylvania saying they wouldn’t appoint Trump electors drew angry tweets from Giuliani that they had “let down America” and he was “ashamed of them.”

There could still be objections to Biden electors when Congress meets on Jan. 6 to count each state’s electoral votes, and Republican Representative Mo Brooks of Alabama has said he intends to make one.

Yet any such challenge must be made by both a House and Senate member. Even if that happens, each chamber would then meet to resolve the objection and it would almost certainly fail, said Alexander Keyssar, a professor at the Harvard Kennedy School, who has studied the Electoral College.

“We’re going to see some little action here, but I think it’s going to be inconsequential,” Keyssar said.