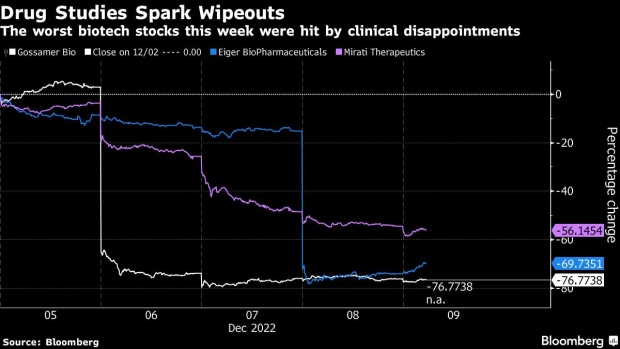 (Bloomberg) -- A spate of clinical results this week has sparked wild swings across the often volatile field of biotech stocks, with some of the sharpest decliners’ studies meeting goals but failing to woo investors amid questions about the therapies’ possible future commercial prospects.

The starkest sell-off was Gossamer Bio Inc., which plunged 75% on Tuesday to a record low after a mid-stage study of its blood pressure disorder drug met the primary endpoint, but underwhelmed investors that had set a higher bar on drug efficacy. Additionally, Eiger BioPharmaceuticals Inc. dived on Thursday by 70% after a late-stage trial of its hepatitis delta virus therapy disappointed compared to an earlier study.

Gossamer’s drug “failed to impress,” as it was unable to “clearly demonstrate signs of differentiation compared to other commercial and pipeline products,” JPMorgan analyst Brian Cheng wrote as he downgraded the stock to underweight. Furthermore, Baird’s Brian Skorney slashed his price target on Eiger to a Street-low $3 from $29, saying that while the study’s “experimental arms technically met statistical significance on the primary endpoint, the results fall well short of what we see as viable for commercialization.”

Another major decliner this week was Mirati Therapeutics Inc., which has shed more than $2.8 billion in market value over the course of four days after data on its lung cancer therapy in combination with Merck’s Keytruda disappointed investors.

On the flip-side, not all the biotech volatility this week was negative. Prometheus Biosciences surged an astounding 166% on Wednesday after two mid-stage studies of its bowel inflammation drug were successful. Likewise, the micro-cap biopharmaceutical company Ambrx soarded as much as 978% on Friday after sharing preliminary data from a breast cancer study.

Further share price swings are also on the horizon for the sector in the coming week as multiple companies will be watched for clinical updates around the American Society of Hematology’s annual meeting. Mirati will also be in the spotlight again as an FDA decision on its therapy for a form of lung cancer is expected by Dec. 14.