The virtual coin was trading near US$46,260 as of 12:32 p.m. in New York, having slid as much as 17 per cent a day earlier before paring some of the losses. The downdraft also swept across tokens such as Ether and Dogecoin, as well as the Bloomberg Galaxy Crypto Index.

El Salvador’s experiment with Bitcoin -- the biggest test of the token’s real-world usefulness -- had a rocky start because of technical glitches to the official digital wallet. El Salvador disconnected the wallet between 1 a.m. and 6 a.m. to fix bugs, President Nayib Bukele said Wednesday.

Food and drink franchises including Starbucks and Pizza Hut are receiving payments in the cryptocurrency, according to Bukele. Businesses are required to accept Bitcoin in exchange for goods and services, though merchants who are technologically unable to receive the e-currency are exempt.

“Social media platforms were very cautious over the weekend that a plunge could occur following El Salvador’s big day,” Edward Moya, senior market analyst at Oanda Corp., wrote in a note. Some investors likely bought in anticipation of the nation implementing its Bitcoin law Sept. 7 and then moved to “sell the fact,” he said. 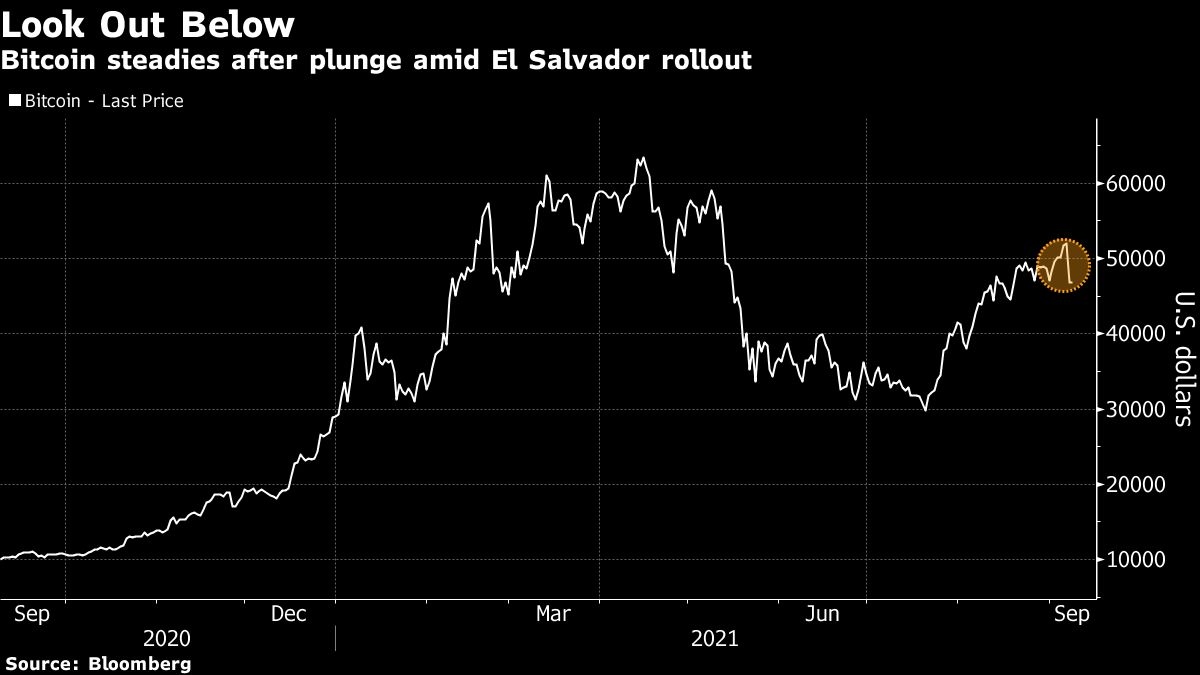 Tuesday’s selloff is the most significant break in a rebound that had lifted Bitcoin almost 75 per cent since late July. Overall cryptocurrency market value fell about US$300 billion in the past 24 hours, according to tracker CoinGecko.

Some US$3.7 billion of cryptocurrency liquidations occurred over the same period, according to Bybt.com. These happen when leveraged positions are closed by exchanges for failing to meet margin requirements.

Billionaire Mike Novogratz, chief executive officer of Galaxy Digital Holdings and a long-time cryptocurrency bull, said the market for digital coins was running strong over the last eight weeks and became overbought. Interest from individual investors spiked on the back of large institutions jumping on board the cryptocurrency wagon, he said.

Oanda’s Moya argued that Bitcoin’s “fundamentals remain intact, as prices iron out a new trading range between the US$46,000 and US$53,000 levels.”

While the El Salvador rollout may have been a proximal cause of the swings in Bitcoin, other variables could also be at play in the famously volatile cryptocurrency sector. In particular, the prospect of reduced Federal Reserve stimulus is a challenge for speculative assets like digital tokens.

“Could it also be that the liquidity beneficiaries -- which could include crypto -- may be sensing more normalized future policy setting from major central banks,” Chris Weston, head of research at Pepperstone Financial Pty, wrote in a note.

Bitcoin futures had an 18 per cent price range amid the wild ride Tuesday. But they closed the day well above their low print of US$43,705, suggesting there were dip buyers stepping in as the selloff escalated.