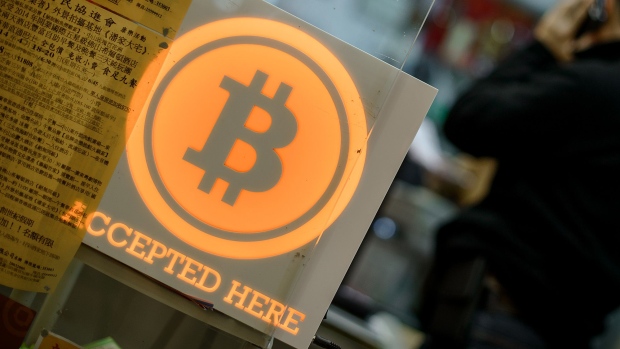 The turmoil that rocked financial markets in March wreaked havoc on Bitcoin, delivering one of the cryptocurrency’s worst months on record.

Investors rushed out of riskier assets amid the coronavirus pandemic that’s casting a shadow on global growth prospects, with Bitcoin losing about 25 per cent in March to trade below US$6,500. That puts the digital coin on pace for its worst month since November 2018 and also marks its seventh month lower out of nine. Since June, only October and January have been in the green.

The token’s rout dented the notion that Bitcoin would act as a haven during times of upheaval. As stocks and metals plunged at paces not seen in decades, digital currencies got hammered in the sprint to liquidate virtually all assets in a rush to cash.

“Bitcoin is a highly speculative instrument so in such risk-averse markets, it’s naturally a front-runner to be offloaded,” said Craig Erlam, senior market analyst at Oanda. “If anyone was holding it as part of a portfolio, then I would imagine it would also be high on the list of positions to close out to cover margin calls or losses elsewhere.”

Cryptocurrencies were hard hit as markets around the world buckled amid the coronavirus crisis that some analysts project could induce the U.S. economy into a recession that rivals the worst in modern history. The spreading virus is also guaranteed to throw the global economy into a protracted drawdown, with many economists losing hope for a strong snapback amid simmering concerns.

Bitcoin peer tokens also got pummeled this month, with Litecoin off by about 35 per cent and XRP losing 25 per cent. Ether was among the hardest hit, dropping more than 40 per cent. In this environment, many digital-token enthusiasts tempered their calls that cryptocurrencies can act as a haven in tempestuous times.

This month, Bitcoin also notched some of its largest daily swings on record, shedding more than 27 per cent on March 12 in what was its biggest one-day loss in nearly seven years. The token’s seen an average daily move of 5.8 per cent in March, according to data compiled by Bloomberg. That compares with swings of 1.6 per cent for the price of gold, which is traditionally thought of as a refuge.

“The volatility is largely due to the fact that it’s quite new and adoption rates are unstable, which leads to large levels of speculation,” Mati Greenspan, founder of Quantum Economics, wrote in a note. “For me, a measure of success would be to see Bitcoin remain on a slow but steady incline, rather than zooming toward the moon due to global uncertainty.” 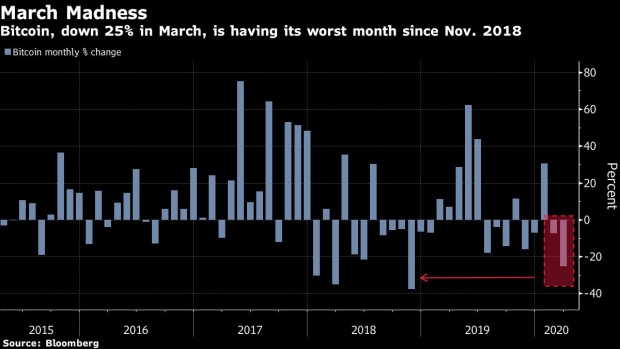 Some crypto fans are looking to Bitcoin’s upcoming halving instead -- a planned reduction in rewards miners receive for validating transactions. Bitcoin rallied in the run-up to the last halving -- which happened in 2016 -- sparking optimism that the same will happen this time around. The event is expected to take place in May.

“While the recent downturn has been a consequence of a global black-swan event, we believe these headwinds for digital assets are short-term,” said Matthew Dibb, co-founder and chief operating officer of Stack, an institutional-grade digital asset platform in Asia. “The Bitcoin halving on May 13 will provide yet another catalyst for a push toward US$15,000 for Bitcoin by 2021.”

To Oanda’s Erlam, volatile environments can provide opportunities, but Bitcoin will have to prove its worth in the current one, he said. “It could be a turning point. I’m just not sure exactly what that would be.”