How interest in cannabis market is heating up in the U.S.

BlackRock Inc. funds are wading into the fast-growing cannabis industry as institutional investors grapple with betting on weed.

Five actively managed BlackRock funds have become the largest institutional investor in Curaleaf Holdings Inc., the dispensary operator that announced plans Wednesday to sell its hemp-derived products in more than 800 CVS Health Corp. stores. With a market cap of about US$2.3 billion, Curaleaf is the third-most valuable U.S. cannabis firm and has risen 45 per cent this year through Wednesday. It runs 42 dispensaries in 12 states.

While BlackRock’s Curaleaf stake is worth just US$11 million, it makes the firm an early mover in a sector struggling to win institutional investment. Even though marijuana is legal in Canada, the federal prohibition on pot in the U.S. has created hurdles for domestic cannabis companies and the firms that seek to invest in them.

The U.S. classifies marijuana as an illicit substance, even though it’s legal for recreational use in 10 states. That’s made many banks and institutional investors steer clear of pot in the U.S., even as sales of legal weed last year surged north of US$10 billion.

“Most institutional investors and banks have stayed on the sidelines for investing in cannabis businesses that touch the plant,” said John Brecker, a partner at Altitude Investment Management, a New York-based cannabis venture fund.

Of BlackRock’s five funds that report holding Curaleaf stock, the US$878 million BlackRock Resources & Commodities Strategy Trust owns the most shares, according to SEC filings. It held about 1.1 million shares as of Dec. 31, according to the fund’s 2018 annual report. 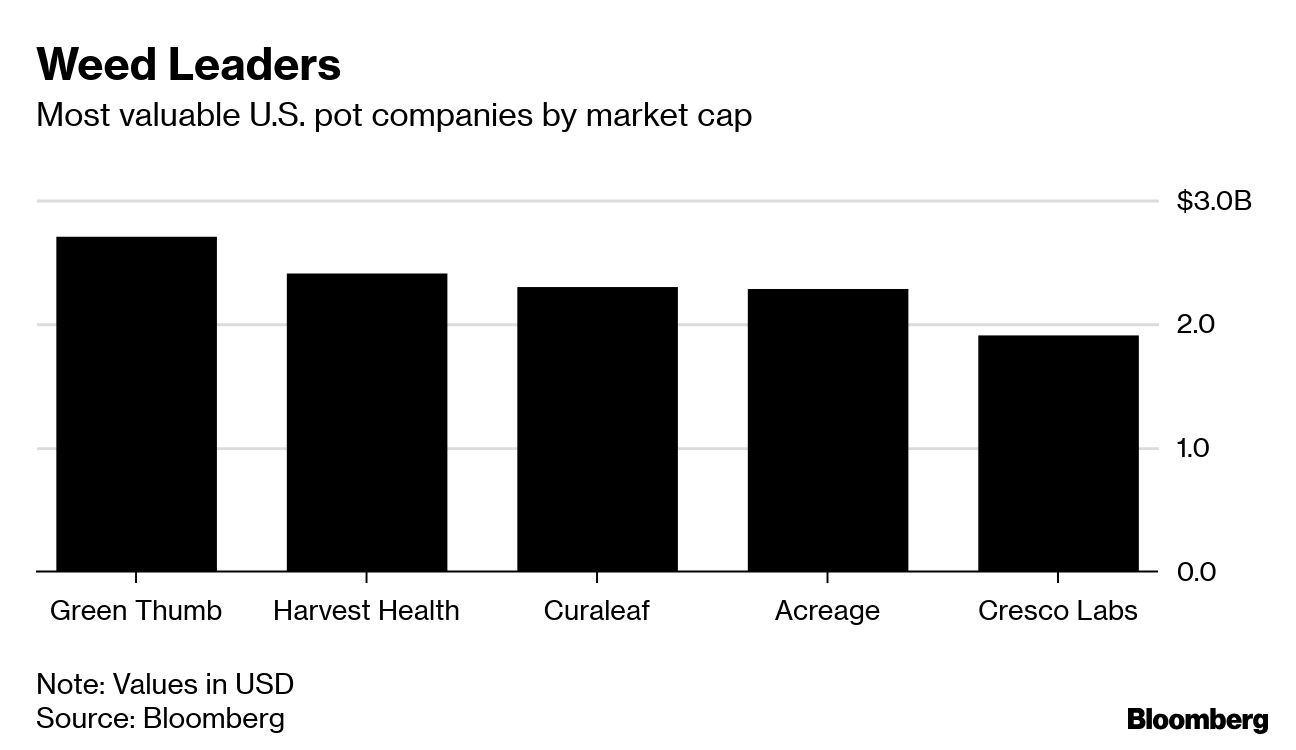 Curaleaf comprised 0.6 per cent of the fund’s net assets at year-end, the annual report shows. The fund invests in companies that work in natural resources and commodities, mostly in the mining and energy industries. Its top holdings are fertilizer maker Nutrien Ltd. and energy producers Royal Dutch Shell Plc and Total SA. The fund is managed by Alastair Bishop, Kyle McClements, Christopher Accettella and Tom Holl.

Farrell Denby, a spokesman for BlackRock, declined to comment.

While Curaleaf has been a high-flying stock this year, the Wakefield, Massachusetts-based company’s shares are down from when it went public through a reverse merger last October. The stock is listed on an alternative exchange based in Toronto, called the Canadian Securities Exchange.

Curaleaf currently operates dispensaries in states including New Jersey, New York and Massachusetts. The company has also been expanding through acquisitions, pushing into Nevada and California with recent deals valued at roughly US$100 million.

Some U.S. investors looking for ways to put money into the pot industry have gravitated to companies that don’t deal directly with growing, distributing or processing the marijuana plant, which may make it be easier for compliance teams at large money managers to stomach.

While Canadian marijuana companies have enjoyed more complete access to capital markets, the prospect that the U.S. ban could be lifted may give large asset managers and public companies reason to move further into the industry.