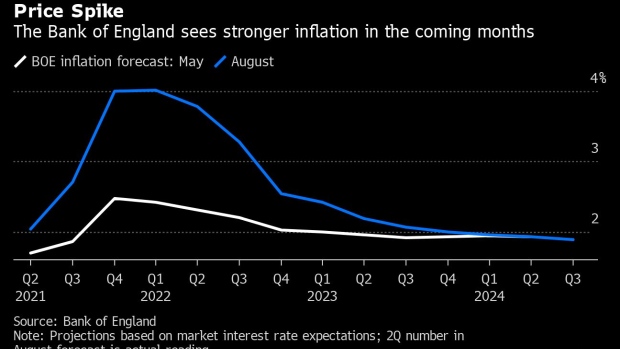 Just a few weeks after warning that interest rates need to rise in the next few years, the Bank of England finds itself facing a delicate balance of risks as the recovery stalls and inflation accelerates.

Growth stagnated in July and is forecast to fall short of the BOE’s projections in the second half of this year. At the same time, financial markets responding to a surge in inflation have moved to price in higher borrowing costs in the first half of next year.

Those conflicting forces put Governor Andrew Bailey and his colleagues on the Monetary Policy Committee in a delicate position, needing to maintain credibility on stabilizing prices while helping the U.K. rebound from its deepest recession in three centuries.

“Speculation has been mounting that the bank will start to raise interest rates next year,” said Luke Bartholomew, senior economist at Aberdeen Standard Investments. “The bank will need to signal to markets quickly if it thinks the current hiking speculation has gone too far. Otherwise it risks these predictions having a certain self-fulfilling logic.”

“Our base case is the first rate hike will come in late-2022, about six months later than markets currently expect. That outlook is predicated on the view that the jobless rate will likely rise, rather than remain steady, when wage support is withdrawn at the end September.”

A decision is due at 12 p.m. London time, with economists expecting the MPC to maintain both record-low interest rates and asset purchases that will total 895 billion pounds ($1.2 trillion) by the end of this year. At least one of the nine members on the MPC is likely to vote for an early end to asset purchases. Here are the issues shaping the announcement:

Britain’s economic backdrop has dimmed since the BOE published its latest forecasts in August, anticipating a 2.9% expansion in the third quarter and 2% in the final three months of the year. The median forecast by economists polled in September is for 2.5% this quarter. Bloomberg Economics says growth could be as low as low 1.5% with a risk the economy also underperforms BOE expectations between October and December.

It means that by the end of this year, the economy could be about 2% smaller than the BOE forecast -- equivalent to the peak-to-trough fall in output registered during the 1990s recession.

Those numbers reflect an economy that barely grew in July as supply disruptions and concern over a resurgence of coronavirus cases took their toll. A survey of purchasing managers due at 9:30 a.m. Thursday will give an indication for growth in September.

Inflation meanwhile has surged further above the BOE’s 2% target, hitting 3.2% in August. The bank’s outlook is for it to touch 4% this year in response to the lifting of virus restrictions, before falling back in 2022 and 2023.

While policy makers aren’t due to produce new forecasts again until November, their reading of the current numbers -- and the prospect of energy-price hikes in the autumn that could both spur inflation and sap consumer spending -- will help steer debate that’s divided economists.

“A slowdown in GDP such as we saw in July normally would be dovish, but it is in our view mostly supply driven, which points to upside inflation risks,” said Liz Martins, an economist at HSBC Bank Plc.

Divisions over when to tighten

The BOE deadlocked last month on whether the minimum conditions have been met to consider withdrawing stimulus -- namely whether inflation was likely to hold in a sustainable way above target.

This month, the appointment of a chief economist to replace Andy Haldane brings the MPC back to its usual strength. Both Huw Pill and external member Catherine Mann will be voting for the first time. Signs about their leanings also will help guide the outlook.

Bloomberg Economics reckons Pill’s previous remarks questioning the wisdom of quantitative easing make him a hawk and that Mann, with sensitivities to plight of the unemployed, may be more dovish. Michael Saunders voted alone in August to halt asset purchases.

“It is possible that another member joins Saunders in dissenting,” Allan Monks, an economist at JPMorgan Chase & Co., wrote in a note. “We assume the weaker growth data will prevent that from happening.”

Inflation overshot the target by a wide enough margin that Bailey will need to write to Chancellor of the Exchequer Rishi Sunak with an explanation. Sunak will respond, and both letters will be released along with the decision.

The BOE’s calculations are complicated by Treasury decisions that will remove support for some of the lowest-paid workers. The government on Sept. 30 ends its furlough program, which paid 80% of wages to those whose workplaces shut during coronavirus lockdowns.

Sunak is also scrapping a temporary increase in universal credit of 20 pounds a week, which makes about a fifth of the income of 1.6 million people. A further drain on consumer finances is due in April, when Sunak will push the tax take to a record to pay for health care.

“The introduction of the new health and social care levy will represent fiscal tightening next year that stands to hold back growth to a greater extent than forecast in August,” said Robert Wood, an economist at Bank of America.

With another 1.6 million people on furlough and millions more unemployed, the question is whether a slowing economy can absorb all those who are looking for work. At the same time, businesses complain they’re often unable to hire enough experienced workers to replace the ones that left during the pandemic and as a result of Britain’s departure from the European Union.