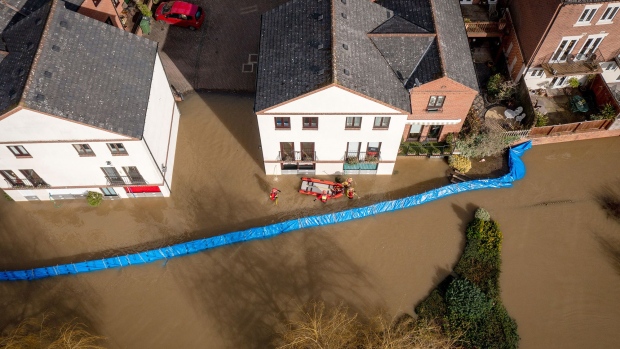 BEWDLEY, WORCESTERSHIRE - FEBRUARY 23: Personnel from the Severn Area Rescue Association (SARA) wade through flood water in Bewdley to check on the welfare of residents after the River Severn breached defences on February 23, 2022 in Bewdley, Worcestershire. Police declared a major incident here over concerns the River Severn could breach its flood barriers. England has been hit by three named storms in a week's time, most recently Storm Franklin. (Photo by Christopher Furlong/Getty Images) , Photographer: Christopher Furlong/Getty Images Europe

(Bloomberg) -- The Bank of England said UK banks and insurers face climate-related losses of £210 billion to £340 billion over the next three decades depending on how quickly the government acts to shift the economy toward net zero emissions.

The UK central bank said the financial system is well placed to absorb those losses, though many of them in the worst case scenario will be passed on to consumers, with the poorest people in society hit hardest.

The findings were outlined in the bank’s first ever stress test to assess how the financial services industry will cope with efforts to transition the economy away from fossil fuels and toward cleaner forms of energy. Prime Minister Boris Johnson’s government is at the forefront of a global push to rein in climate-damaging greenhouse-gas pollution.

“Climate change will inevitably drive losses for banks and insurers, even in a scenario where governments around the world take swift and early action,” Sam Woods, chief executive officer of the BOE’s Prudential Regulation Authority, which oversees banks and insurers, said in a speech released along with the stress tests on Tuesday.

The BOE did not release the results for individual firms. It said the exercise uncovered “significant” data gaps showed that this sort of climate analysis remains in its “infancy.”

The test was based on three scenarios that assume early, late and no policy action on the climate over 30 years, as designed for central banks globally by the Network for Greening the Financial System. It’s meant as an “exploratory exercise” and won’t be used to set capital requirements, though the BOE expects banks to carry out their own annual climate assessments.

Losses were lowest if policy makers take “early action” to curtail climate change, boosting the cost of carbon emissions and resulting in a relatively small increase in global temperatures. Under that scenario, the hit to banks would be under £100 billion and insurers just over that level.

A worst-case scenario where no additional action is taken and climate change is allowed to proceed unchecked, losses for banks would be lower but insurers would have to absorb more than £200 billion of costs.

“At worst, we might end up under-capitalizing banks and insurers for risks they face, raising questions about their overall resilience,” Woods said. “Or we could end up over-capitalizing them inefficiently, reducing their ability to support the transition.”

The UK central bank test is the “world’s toughest yet,” with more demanding standards than France’s climate test last year, according to the credit rating company Fitch Ratings.

“It assumes higher peak carbon prices and greater global warming, and it limits credit for the management actions that firms could take to mitigate the effect of the scenarios on their business models,” Fitch said in a note released ahead of the results.