Powell's Speech Made Me Even More Frightened: Sri Kumar

Bill Gross is talking trash about the bond market -- literally.

In a meandering and sometimes off-kilter investment outlook posted on his website, the onetime bond king said longer-term Treasury yields are so low that the funds that buy them belong in the “investment garbage can.”

Ten-year yields traded at 1.29 per cent as of 6:07 a.m. in New York. They are likely to climb to 2 per cent over the next 12 months, handing investors a loss of roughly 3 per cent, he wrote. Stocks could also fall into the category of “trash” should earnings growth fall short of lofty expectations.

“Cash has been trash for a long time, but there are now new contenders,” said Gross, who co-founded Pacific Investment Management Co. in the 1970s and retired in 2019. “Intermediate to long-term bond funds are in that trash receptacle for sure, but will stocks follow? Earnings growth had better be double-digit-plus or else they could join the garbage truck.”

Gross, 77, has been bearish on bonds for a while. In March, he told Bloomberg TV that he began betting against Treasuries at about the 1.25 per cent. Rates initially sold off in the aftermath, but have since rallied as a resurgent coronavirus raises concerns over economic growth. 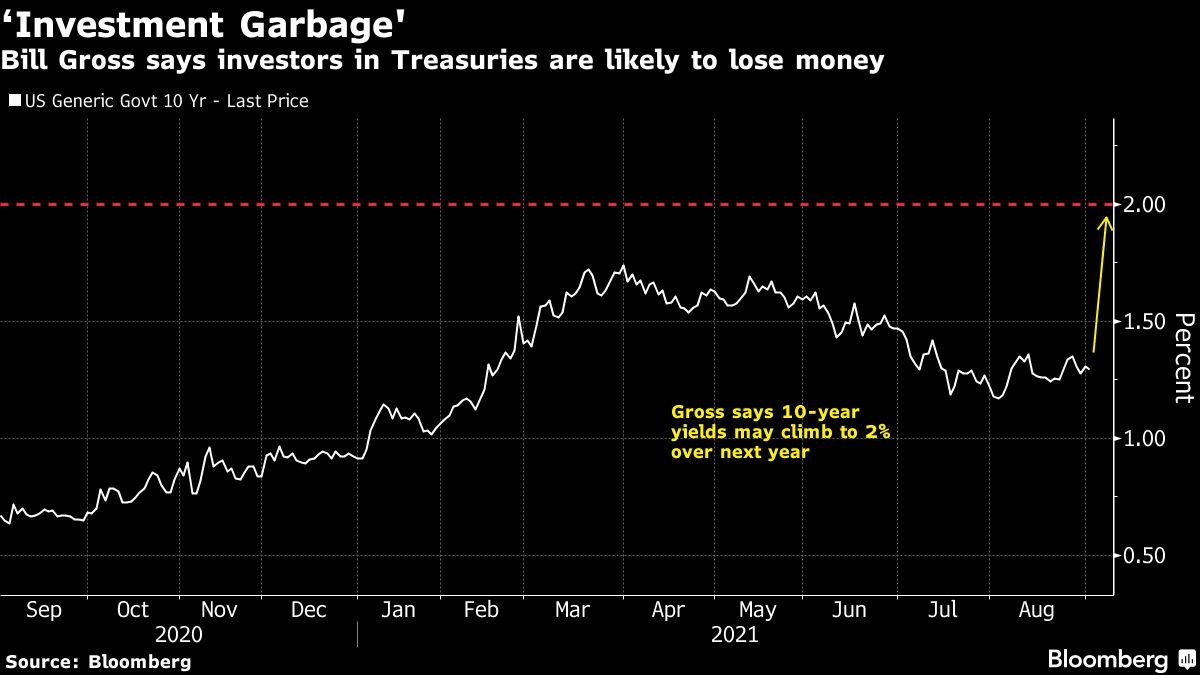 In Monday’s note, Gross suggested supply and demand dynamics are stacking up against Treasuries, saying that yields at current levels have “nowhere to go but up.”

The Federal Reserve, which has been absorbing about 60 per cent of net Treasury issuances through its quantitative-easing program, may soon start scaling back asset purchases at a time when demand from foreign central banks and investors has already been waning, he wrote. Meanwhile, fiscal deficits of at least US$1.5 trillion going forward suggest Treasury supply will remain high.

“How willing, therefore, will private markets be to absorb this future 60 per cent in mid-2022 and beyond?” Gross wrote. “Perhaps if inflation comes back to the 2 per cent+ target by then, a ‘tantrum’ can be avoided, but how many more fiscal spending programs can we afford without paying for it with higher interest rates?”