Canadian investors are finding themselves in an unusual position -- outperforming their U.S. counterparts across all three main asset classes as conciliatory central banks reignite risk in global markets.

Canada’s benchmark S&P/TSX Composite index has surged 8.5 per cent this year, second-best among developed markets and ahead of the S&P 500’s 7.6 per cent rise. The Bloomberg Barclays Canada Aggregate bond index is up 0.75 per cent compared with 0.53 percent for the U.S. And the loonie is the best-performing currency among its Group of 10 peers, vaulting 3.9 per cent higher to $1.3132 per U.S. dollar this year.

“The most powerful thing has been the change in tone coming from global central bankers and particularly those in North America,” said Kurt Reiman, chief investment strategist at BlackRock Canada, adding markets also seem to be less worried about geopolitical risks.

Canadian investors aren’t used to being in the limelight. Annual returns on Canadian equities have lagged the U.S. by about 5.8 percentage points for the past 10 years while the loonie has sunk about 6.5 per cent against its U.S. counterpart over that time frame.

But confronted with slowing growth, tame inflation and volatile markets at the end of last year, central bankers have changed their tune. Federal Reserve Chairman Jerome Powell signaled on Wednesday that the U.S. central bank is done raising interest rates for a while and it will be flexible in reducing its bond holdings. 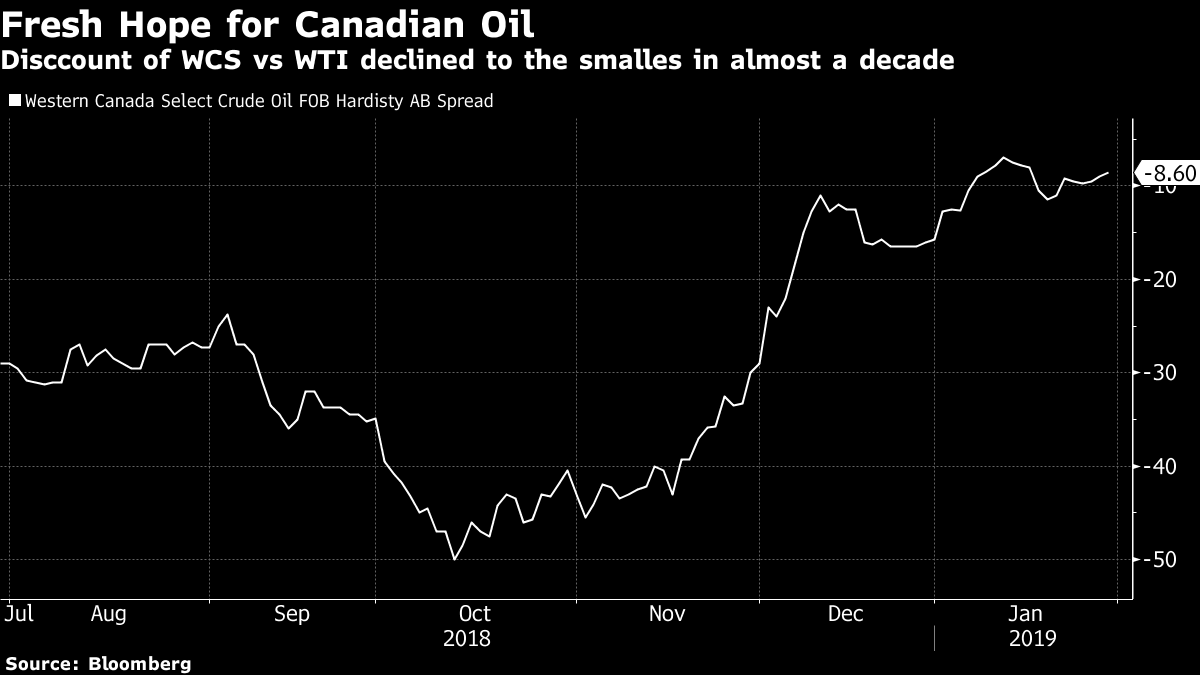 The Bank of Canada has also indicated there’s less urgency to raise interest rates with Governor Stephen Poloz saying in Davos last week that he would monitor housing markets, global trade tensions and oil prices, which sank at the end of last year, as he gauges the timing of his next hike.

Those oil prices have now snapped back. West Texas Intermediate oil has jumped about 20 per cent this year while mandated supply cuts in Alberta have helped shrink the differential with Canadian crude to about $9.00, just below the near-decade low of US$6.95 earlier in January.

“That’s a pretty significant rebound, so things clearly got washed out towards the end of last year,” David Stonehouse, head of North American and specialty investments at AGF Investments Inc. “We actually think that western Canadian select is maybe just slightly too tight relative to underlying WTI right now, but only maybe by a few dollars versus what we would expect neutral to be.”

After diving almost 12 per cent last year in its worst performance in a decade, stocks have rebounded to close Wednesday at 15,484, driven by energy and cannabis. Pot stocks Canopy Growth Corp. and Cronos Group Inc. are the two best-performing stocks this year, gaining 72 per cent and 68 per cent respectively.

The Canadian dollar, which tracks oil prices closely, is trading at the highest since mid-November, even as investors pare back bets for interest rate hikes on both sides of the border this year.

“The TSX has been undervalued relative to itself, and the U.S. for quite some time, so we are probably going to get a normalization of that valuation gap throughout the year," said Kevin Headland, senior investment strategist at Manulife Investments in Toronto. He sees “upper single digit returns” for the market this year.

BlackRock’s Reiman isn’t so sure. The risk on mode for Canadian equities and credit assets may require further support from economic activity and oil prices, he said. BlackRock sees growth slowing to about 1.75 percent this year compared with the average 1.9 percent forecast from a Bloomberg survey of analysts.

Reiman said he prefers the front end of the yield curve and will find some select opportunities in corporate credit, but when it come to equities, he like markets with more resilience in their earnings estimates.

“I think this early euphoria will fade,” he said.