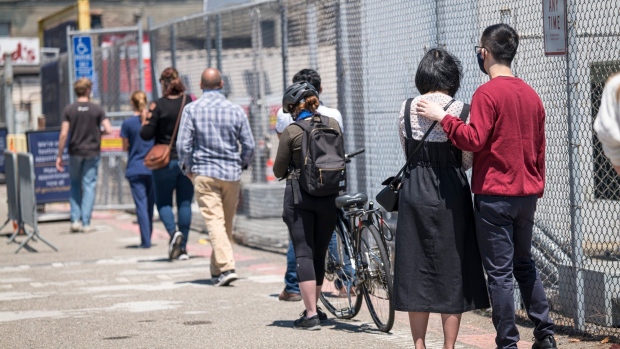 People wearing protective masks wait in line to get a Covid-19 swab test at a testing site in San Francisco, California, U.S., on Thursday, July 30, 2020. California recorded 194 new virus deaths, second only to the 197 reported Wednesday and above the 14-day average of 112. , Bloomberg

California’s Covid-19 cases passed 500,000, though the latest increase was less than the 14-day average. U.S. nationwide deaths exceeded 1,000 for a fifth consecutive day. Reported deaths slowed in Florida, where a hurricane threat is disrupting efforts to contain the pandemic.

Premier Dan Andrews could announce that Victoria’s capital, Melbourne, would move to a New Zealand-style lockdown which would close most businesses, keeping only essential services operating and shutting down most of the city’s public transport network, Sky News reported.

The Age newspaper said the tighter restrictions could be in place for six weeks and begin as soon as Wednesday.

Prime Minister Boris Johnson is considering sealing off Greater London and ordering at-risk members of the population to stay at home under a potential scenario designed to avert a second national lockdown, according to news reports.

Possible measures include locking down the capital if infection rates spike and tightening quarantine rules on those flying into the U.K., The Sunday Telegraph reported. There would be travel curbs in and out of the M25 highway encircling Greater London and a ban on overnight stays, according to the Sunday Times.

Elderly people and those considered to have an increased risk from Covid-19 could be asked to stay at home, and “harder” local lockdowns could be ordered than the restrictions already imposed on parts of northern England.

Brazil reported 45,392 new cases, down from 52,383 the previous day. Total cases, in the nation hit worst by outbreak after the U.S., are 2.6 million, according to data compiled by Johns Hopkins University and Bloomberg. Another 1,088 deaths were reported, down from 1,212 the day before, for a total of 92,475.

Hurricane Isaias weakened to a tropical storm, but is expected to regain hurricane strength overnight while approaching Florida’s southeastern coast, the National Hurricane Center said in a statement.

The storm edged closer to Florida on Saturday, adding to woes for a state grappling with record cases of Covid-19, and potentially causing $3 billion in economic losses if it rakes the eastern seaboard. Governor Ron DeSantis has declared a state of emergency and Covid testing sites will be shut until Wednesday. Virus statistics are likely to vary in Florida over the next few days.

“For those living on the East Coast, prepare now,” DeSantis said on Twitter on Friday. “Have 7 days of food, water, medicine & other supplies in case you lose power.”

Texas reported 9,539 daily new cases on Saturday, boosting the state’s total to 430,485 confirmed cases. Deaths rose by 268 to 6,837, the Department of State Health Services said on its website.

An emergency committee of the World Health Organization said it expects the Covid-19 pandemic to be of “lengthy duration” and that it remains “a public health emergency of international concern,” the WHO said in a statement Saturday.

“The pandemic is a once-in-a-century health crisis, the effects of which will be felt for decades to come,” WHO Director General Tedros Adhanom Ghebreyesus was quoted as telling panel on Friday. “Many countries that believed they were past the worst are now grappling with new outbreaks.”

The committee recommended a sustained attack on the virus on all fronts, from testing and tracing to developing treatments to vaccines.

Marathon Petroleum Corp. will indefinitely idle the Martinez refinery in California and the Gallup refinery in New Mexico with no plans to restart normal operations, the company said in a statement.

Supply disruptions aren’t expected and the Golden Eagle facility in Martinez will be converted to a terminal, according to Marathon. “Indefinite idling unfortunately means most jobs at these refineries will no longer be necessary, and we expect to begin a phased reduction of staffing levels in October,” according to the statement.

“While I cannot blame anyone directly for this, this week has shown that there are some Members of Congress who fail to take this crisis seriously,” said the Arizona Democrat. “Numerous Republican members routinely strut around the Capitol without a mask to selfishly make a political statement at the expense of their colleagues, staff, and their families.”

Grijalva said in a statement he isn’t exhibiting symptoms and has been self-isolating at his home in Washington since Wednesday upon learning that Texas Republican Representative Louie Gohmert tested positive.

California’s confirmed cases surpassed 500,000 with an additional 6,542 infections, fewer than the rolling 14-day average, according to the state health department’s website. Deaths increased by 219 on Friday to 9,224, a 2.4% rise from the previous day.

“There’s still a lot of work to do” to strike a deal, Treasury Secretary Steven Mnuchin after the three-hour meeting Saturday. An impasse continues, he said, on whether to do a short-term extension deal for enhanced unemployment benefits or to push forward with efforts for a comprehensive deal sought by Democrats.

New York Governor Andrew Cuomo said he would make a decision on school reopening in the coming week, based mostly on the overall infection rate. He said New York City missed a Friday deadline to submit reopening plans.

“An initial decision at this point is schools should plan on reopening,” Cuomo said in a call with reporters Saturday.

But he cautioned that one variable will be the comfort level of parents -- and he said not all parents are in favor of opening. “So you open a school, you will have partial attendance, which will serve no one,” he said.

Police ended the protests in the center of the German capital, demanding that they disperse, because many of those taking part were not wearing masks or observing distancing rules. They said they would bring charges against the organizer. Protesters waved placards and chanted slogans including “The biggest conspiracy theory is the corona pandemic,” according to DPA.

“Yes demonstrations must also be possible in coronavirus times, but not like this,” Spahn said in a tweet. “Distancing, hygiene rules and masks protect us all.”

The state, which is preparing for Hurricane Isaias, reported another 9,642 cases, a 2% rise that is less than the 2.3% average increase over the previous week. Total cases are now 480,028.

U.K. Prime Minister Boris Johnson is facing mounting pressure to tighten lockdown measures eased in recent weeks, as infections in parts of England rise. One of the nation’s solutions has been to force incoming travelers from certain countries, such as Spain since July 26, into quarantine on arrival.

The U.S. added 66,545 new virus cases Friday, a 1.5% increase compared to the daily average rise of 1.6% of the previous week, according to data from Johns Hopkins University and Bloomberg. Total cases were 4,561,511.

Germany recorded 864 new infections in the 24 hours through Saturday morning, according to data from Johns Hopkins University, significantly more than registered through most of July.

A spate of smaller outbreaks has kept the transmission rate above the threshold of 1.0 for eight consecutive days.

Russia plans to start mass vaccinations against Covid-19 in October, with health workers and teachers first in line to get the inoculation against the disease, Health Minister Mikhail Murashko said.

A drug developed by Moscow’s Gamaleya Institute and the Russian Direct Investment Fund has completed clinical trials and the authorities are preparing to register it with regulators, Murashko was quoted as saying by the state-run Tass news service.

A record 658 new coronavirus cases were reported in the country on Saturday, up from 657 on Friday, the Polish health ministry wrote in a Twitter post. Deaths rose by 5 to 1,721.

A total of 386 passengers have been quarantined after a trip to Svalbard with a Hurtigruten cruise ship as coronavirus infections were recorded on board the cruiser. MS Roald Amundsen has been isolated at the quay in Tromso in Norway after four crew members tested positive for Covid-19, news agency NTB reported Saturday.

The ship arrived in Tromso from Svalbard on Friday and 160 crew members are being kept in isolation on board. The 177 passengers who have left the cruiser have been instructed to self-quarantine. Hurtigruten said on Friday that it’s contacting 209 passengers aboard an earlier trip.

The country’s authorities said on Saturday that 745 more people have been infected with coronavirus in the past 24 hours, versus 671 the day before. One more death was reported, bringing the total number of fatalities to 9,841, more than any other country in the world when adjusted for population size.