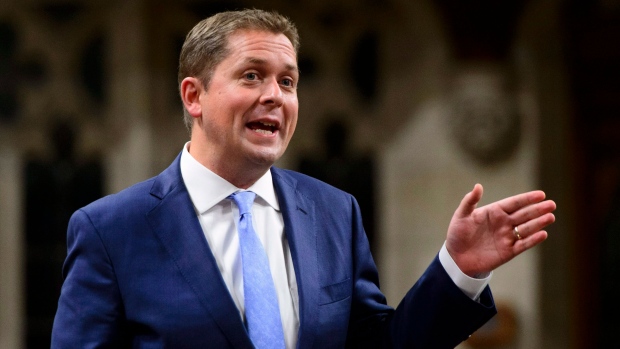 Conservative Leader Andrew Scheer stands during question period in the House of Commons on Parliament Hill in Ottawa on Wednesday, Sept. 19, 2018. , The Canadian Press

Canada’s energy bonds, many of which have lagged a corporate debt rally, could get a boost should the opposition Conservative Party defeat Prime Minister Justin Trudeau in October elections, according to analysts at Toronto-Dominion Bank and Manulife Investments.

Conservative Leader Andrew Scheer’s pledge to scale back new approval requirements for energy projects would be seen as a positive development for the industry, according to James Spicer, a New York-based analyst at TD Securities.

Canada’s ruling Liberal party passed a bill known as C-69 this year, widening the range of impacts that must be included on major industrial and energy projects. The Canadian Association of Petroleum Producers and the Canadian Energy Pipeline Association both issued separate statements rejecting the bill.

“A conservative government win would be positive for the Canadian energy sector and Canadian energy bonds,” said Spicer, in a written response to questions. “The current government and legislation like C-69 have been seen by some companies in the energy industry as an existential threat for their competitiveness.”

The sector could use a boost. The yield on an index of 5-year Canadian high-yield energy bonds declined about 66 basis points in the last year, compared with about 95 basis points of tightening for Canadian corporate bonds rated at the low end of investment grade, according to Bloomberg Valuation data. Globally, high yield oil exploration and production bonds have lost 9% over the past three months, even as U.S. junk bonds and most corporate bonds have rallied.

A Scheer victory would align the federal government in the same Conservative camp as the administration in Alberta, the largest oil and gas producer in the country. That would potentially make it easier to agree on policies, said Philip Petursson, the chief investment strategist at Toronto-based Manulife Investments.

The Conservatives have a strong base in Alberta, “so I think they will do what they can to support the Alberta economy,” Petursson said in an interview in Toronto. “Federal politics is very regional right now, so the results of it will dictate the support to the energy sector.”

Polling averages compiled by the Canadian Broadcasting Corp. show the Conservatives and Trudeau’s Liberals are statistically tied in voter intentions for the Oct. 21 vote. After trailing the Liberals for most of the past four years, the Conservatives led by as much as 7 percentage points this summer but have seen that lead erode in recent weeks.

Energy policy will be a key issue in the campaign, with Scheer vowing to end the carbon tax that Trudeau imposed this year on provinces that don’t already have a similar plan.

Trudeau has tried to strike a balance between reducing emissions with the carbon tax, while agreeing to buy the Trans Mountain pipeline last year when Kinder Morgan Inc. threatened to scrap the expansion amid rising opposition. Construction started on the line this month.

“Only a Conservative majority government would monetize Trans Mountain quickly,” said Geof Marshall, chief of credit at Toronto-based CI Investments. “Even then, I am not sure egress capacity additions could come on stream quickly enough.”

The oil pipeline expansion and proposed LNG export facilities on the Pacific Coast would save a lot of Canadian energy companies, especially those weighted to gas, said Marshall, whose firm manages C$30 billion ($23 billion) in fixed income.

While a conservative victory would be an uplift for the whose sector, pipeline companies including TC Energy Corp. would be “direct beneficiaries,” TD’s Spicer said.