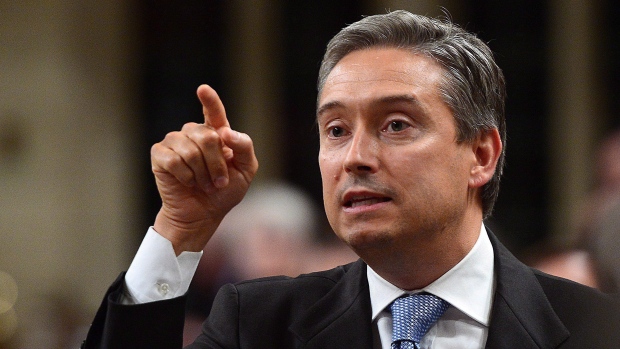 Francois Philippe Champagne, Minister of International Trade, stands during question period in the House of Commons on Parliament Hill in Ottawa on Monday, Oct. 16, 2017. , The Canadian Press

Foreign Minister Francois-Philippe Champagne made the pledge Monday alongside Juan Guaido, the Venezuelan opposition leader seeking to oust President Nicolas Maduro. His comments come more than a year after the Canadian government began playing an activist role in the effort to help break Maduro’s grip on power.

During a press conference in Ottawa, Champagne highlighted the increasingly dire conditions that are expected to drive as many as six million people out of the oil-rich South American nation by the end of the year.

“Obviously we will be engaging with Cuba,” he told reporters at the foreign ministry. “The solution needs to come from the region, so we will work with the region.”

U.S. President Donald Trump accuses the communist government in Havana of propping up Maduro and has been steadily tightening sanctions on the Caribbean island nation. Canada has taken a different tack, holding three rounds of high-level, face-to-face talks with Cuba last year.

Guaido, speaking in Spanish, said it’s “no secret” Cuba is providing both ideological and intelligence support for Maduro, whose predecessor Hugo Chavez was mentored by Fidel Castro. The opposition leader, who defied a travel ban in hopes of rekindling international support, offered cautious praise for the attempt to bring Havana onside.

“We believe that Canada’s efforts with different countries, including Cuba, are very positive in trying to find a solution,” Guaido said.

A top Cuban official said in April that his government was willing to help negotiate a peaceful end to the political crisis -- so long as Maduro requested it. The Cuban embassy in Ottawa didn’t immediately respond to a request for comment Monday.

“Our objective remains the restoration of democracy and human rights in Venezuela through early elections, which should be free and fair under international observation,” Champagne said.

Guaido, who was blocked from entering the Caracas legislature earlier this year in a move that allowed a Maduro loyalist to be chosen as leader in his place, stressed the need for a local solution to his country’s crisis.

“It’s Venezuelans who must decide the future of Venezuela,” said Guaido, who was scheduled to hold a private meeting with Trudeau later Monday.