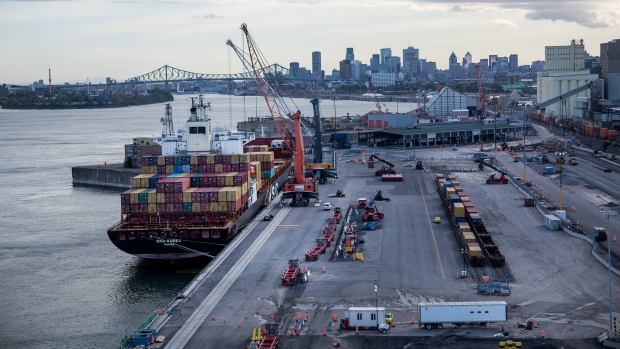 A cargo ships sits docked at the Viau terminal in the Port of Montreal in Montreal, Quebec, Sept. 21, 2016. Bloomberg/Valerian Mazataud

Canada’s wholesalers posted a surprise decline in August as machinery and equipment sales pulled back.

Canadian wholesales fell 1.2 per cent in August, Statistics Canada reported Wednesday from Ottawa. That missed the 0.3-per-cent gain that economists surveyed by Bloomberg were expecting.

Decreases were widespread, with five of seven subsectors declining. Stripping out price effects, wholesale volumes fell 1.3 per cent from July.

Machinery and equipment fell for the second month in a row, leading declines and falling 2.6 per cent in August. Construction, forestry, mining, and industrial machinery and equipment were the main downside contributors. A continued slowdown in these sectors may be worrying signal when it comes to the investment outlook in Canada.

Wholesale inventories also fell for the first time in a year, down 0.3 per cent in August. Still, the inventory-to-sales ratio ticked up to 1.45, remaining at one of the highest levels since the early 1990s — a possible risk to future growth prospects.