Aurora Cannabis continues to focus on restructuring its operations as it looks to cut costs to reach that long-awaited profitability target. BNN Bloomberg was first to report that Aurora will be shutting down three of its European offices, in Portugal, Italy and Spain, while laying off about one-quarter of the company's staff on the continent. The company attributed the closures to a softer-than-expected medical cannabis market in Europe, but will continue to have a presence in Denmark and Germany. Aurora recently reported about $4 million in international business revenue in its most recent quarter, accounting for about six per cent in total sales.

Want to get people out of the illicit market and toward the legal space? Price will continue to be the leading factor in driving out the illicit market, Aurora’s new chief marketing officer told Bloomberg News. The news wire reports that the company's newest head of its U.S. business said that once customers are happy with their legal offerings, they'll be more inclined to spend more on pricier items like vape pens and edibles. Those products will be "stickier" said Miguel Martin, who noted those products are not as prevalent on the illicit market.

Cannabis consumption lounges not in the cards in Ontario, for now

It doesn't appear that cannabis consumption lounges will be opening up in Ontario anytime soon. The CBC reports that after receiving 850 pages of consultation documents resulting from a provincial call to discuss the potential for pot lounges, a government spokesperson said there will be no immediate changes to Ontario's cannabis framework. However, the provincial government said it will consider the consultation results in the future. The CBC reports that the Ontario government was informed by medical officers across the province that it should not allow cannabis lounges or make the drug easier to get than it is now. Meanwhile, several business groups endorsed the lounge concept, saying people will one day want to consume cannabis the same way they do alcohol.

High Times, the venerable cannabis counter-culture magazine, has suspended publishing due to the COVID-19 pandemic. Celebstoner reports that Hightimes Holdings, the magazine's parent company, hasn't published an edition of the 46-year-old periodical for the past four months and it's unknown when a new issue will be back on store shelves. Most of the magazine's editorial staff were laid off in March, the website reports. Hightimes Holdings is looking to go public but the company has yet to list its shares on an exchange. 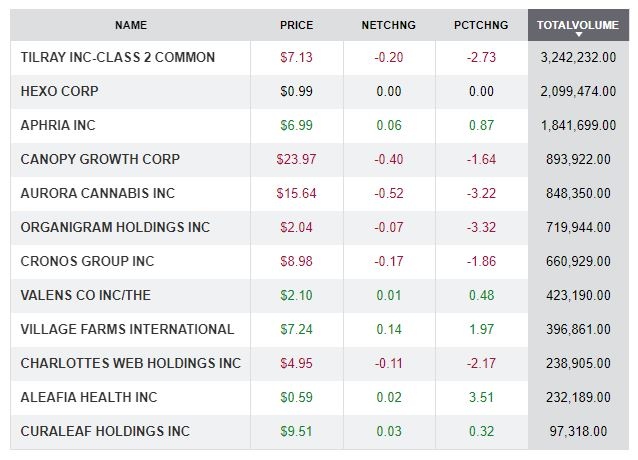