Shares of Quebec-based cannabis producer Hexo plunged on Thursday after the company’s third-quarter results missed analyst revenue expectations. Hexo saw net revenues of $13 million in the three months ended April 30, up from $1.24 million during the same period a year earlier but short of the $15.3 million analysts were expected. Hexo's quarterly net loss deepened to $7.75 million, from a $1.97-million loss a year earlier, as operating expenses jumped to $24.1 million from $5.3 million during the same period in 2018. Still, Hexo did signal plans to enter the crowded U.S. CBD market in 2020 through a joint venture with Molson Coors Brewing. The company has already secured a supply of 60,000 kilograms of hemp for extraction of CBD which it plans to earmark for its U.S. venture as well as for the legal Canadian edibles market.

Lithium miners need investors badly to keep up with demand – too bad they’re all too focused on the cannabis industry to pay much attention to the mineral’s long-term needs.  About US$9 billion has to be invested across the lithium mining sector in order to add the 600,000 tons of new capacity needed to match demand in coming years. However, most of the speculative money that would have usually travelled to the exploratory mining world  has moved to cannabis and crypto-currencies. “A lot of the risk capital that had gone into the lithium sector is now running into cannabis," one fund manager told Bloomberg.

U.S. multi-state operator iAnthus Capital Holdings is offering its shareholders an apology. The company issued a statement on Thursday to explain why the company decided to cancel stock options on June 6 earmarked for many of its senior executives and then issued new options at a lower price. The move raised the ire of the company’s shareholders, which has seen iAnthus shares plunge 39 per cent over the past year. “We made the decision to issue new stock options, and cancel certain previously issued stock options, to ensure our team stays focused on growing the company and aligned with our shareholders through a long-term incentive program," said Hadley Ford, iAnthus’s CEO, in a statement.  "However, we clearly did not handle the public release of this information in the proactive manner which our shareholders have come to expect from us, and for this I apologize."

There is some new momentum behind the U.S. cannabis industry getting government support to be able to conduct banking and other financial services. MJBizDaily reports that the House Appropriations Committee approved the fiscal year 2020 Financial Services and General Government bill, which contains some measures that would  protect banks serving lawful marijuana businesses from punishment by federal financial regulators. A separate piece of legislation, the Secure and Fair Enforcement (SAFE) Banking Act, also passed a key House panel, but would offer a more sustainable solution to the U.S. cannabis industry’s ability to conduct basic banking services.

"You’re trying to try it as fast as possible while still maintaining THC and CBD content."
-- Enwave CEO Brent Charleton on how cannabis companies including Aurora and Tilray are making use of the company's dehydration technology that’s also used to make the popular dried snack “Moon Cheese”. 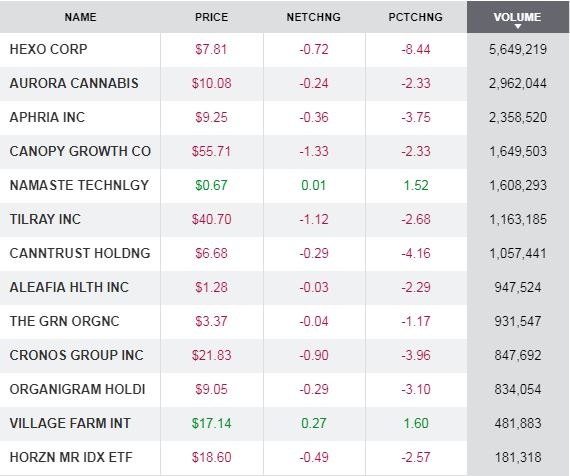