The coming year won’t just be about pot stores in Ontario and legal pot cookies. It also might be the time that institutional investors eyeing the cannabis industry finally take the plunge in the nascent sector. As several pot companies have forged billion-dollar ties with beverage and tobacco giants, institutional support is rising, according to Canopy Growth CEO Bruce Linton in an interview with BNN Bloomberg. But any big bets are likely to go toward cannabis firms that demonstrate strong corporate governance practices, Linton added.

The new U.S. Farm Bill is one step closer from reaching the finish line as the Senate voted in its favour. The farm bill is expected to cost US$867 billion over 10 years and would also remove industrial hemp from the U.S. government's list of controlled substances. The move would allow hemp, which contains the non-psychoactive CBD chemical as an agricultural commodity and eligible for crop insurance.

Will the Empire State be next to legalize cannabis? It’s possible, with the New York Post reporting that aides of Governor Andrew Cuomo will soon introduce a plan for legalizing recreational marijuana, maybe even as part of his next executive budget. Legalizing recreational marijuana in New York state is worth about US$3.1 billion and could generate millions of dollars in taxes that could be earmarked for infrastructure or other social programs, according to a recent study.

"It’s just around the corner."
- Aurora Cannabis CEO Terry Booth on seeing legal medical and adult-use cannabis open up across the U.S. . 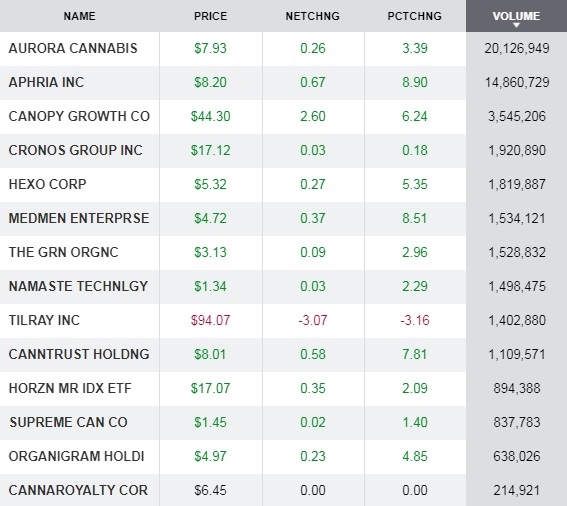