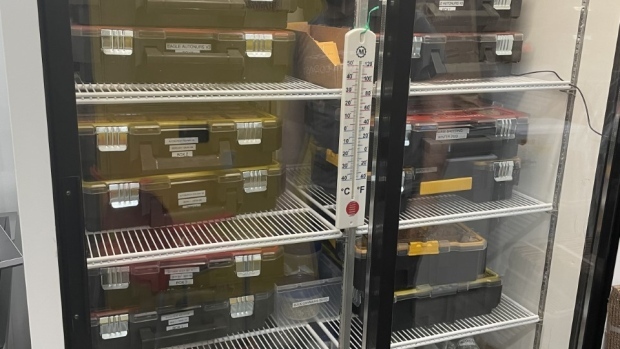 As competition crowds marketplace, Aurora turns to new genetics to stand out

Aurora Cannabis Inc.'s future may lie in a non-descript refrigerator tucked away in a modest-sized industrial building on Vancouver Island.

In a fridge not unlike the one in your kitchen lies hundreds of thousands of cannabis seeds, dutifully catalogued and stored in cool, dry conditions, that form a crucial part of the Edmonton-based company's plan to flex its science muscles in an attempt to stand out from the rest of the crowded Canadian cannabis market.

Aurora's facility in Comox, B.C. – dubbed "Coast" – is home to those seeds, along with dozens of cannabis tissue samples and 2,500 plants, each of which is carefully studied to find new, unique strains that could one day be worth millions of dollars, said Charles Pick, senior vice president of science and innovation at Aurora Cannabis, who manages the Coast facility.

"We have a lot of great genetics that we can work on but we're already moving beyond what we had," Pick said in a phone interview. "We're taking plants that are already super interesting and we're crossing them and being able to produce hundreds, if not thousands of seeds."

In a market that has been weighed down by a glut of unsaleable cannabis, finding a one-in-a-kind cannabis cultivar could be worth its weight in gold. Much of the country's oversupplied cannabis situation lies in the fact that too many producers grew the same strain, sourced from the legacy market and introduced into the federal system through Health Canada's one-time amnesty program.

Jamie Blundell, chief executive officer at Segra International Corp., which develops new cannabis genetics, said the company studied about 300 cannabis products on the market, analyzed their genetics, and found there are 40 or 50 unique strains for sale in Canada.

"These large producers can't be the best at everything and they can't expect to," Blundell said. "Over time, companies will likely outsource their pheno-hunting where experts will help match genetics with what they're looking for."

That makes finding a new strain with the right mix of high THC potency, terpene count, and visual appeal even more crucial among top producers, each of which has a similar robust seed bank and R&D program as Aurora. 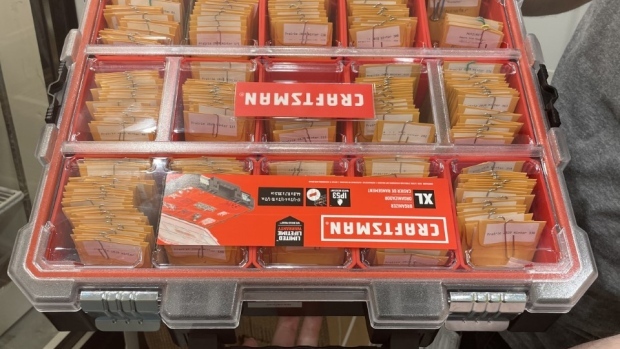 The result is a dried flower product that companies can charge a premium for and bolster their top line. But the space is becoming increasingly crowded as producers, including Aurora, shift away from selling cheaper brands and focus on higher-margin products, said David Kideckel, analyst at ATB Capital Markets.

"You're competing with other, more well-established brands that have been around before legalization," he said in a phone interview. "The LPs need to pursue this premium strategy but how this will resonate with consumers who have already been buying them through illicit means will be a big question."

In Aurora's case, finding that new strain takes a lot of growing - and waiting. The company starts with 2,500 seedlings grown from an equal amount of different strains, where 80 per cent of which are culled into a new growing cycle, Pick said.

Those remaining plants get cloned about a dozen times and get whittled down by another 80 per cent. The survivors go through another heavy growing cycle and if they continue to meet certain threshold conditions, get sent to one of Aurora's main production facilities for a test run before deciding if it should be released for sale, Pick said.

It also could be licensed to other producers for sale, with Aurora taking back a three-to-five per cent royalty charge on each purchase, rising to as high as 10 per cent for a strain with particularly unique qualities like high potency or resistance to powdery mildew, Pick said.

"There's a huge value placed on higher potency so people will be looking for that because they don't have that in their portfolio so we've seen a lot of interest just on that basis alone," Pick said.

Kideckel - who maintains a "underperform" rating on Aurora's stock with a $7.50 price target - describes the company's science-based approach as key to "make strides in the Canadian market" although it won't be an immediate fix to the company's long-standing financial woes.

"I think Aurora is positioning themselves well to compete in the future, but not necessarily right now because these scientific achievements will take time to develop," he said.

Mississauga councillors voted to continue opting out of allowing cannabis retailers to set up shop in the city. The measure, which won support from Mayor Bonnie Crombie, fell in a 8 to 4 vote earlier this week, although it still has to go before city council for a final vote. A study released by the city said permitting the sale of cannabis in Mississauga would result in $74 million of sales, providing "new opportunities for small business" and likely some extra cash for the city's coffers. Roughly 100 to 150 illegal dispensaries operate within Peel Region's borders, which includes Mississauga. About 70 per cent of the city's residents are in favour of opening cannabis retailers, Crombie said in a tweet. Meanwhile in southern Ontario, councillors from Essex County's Tecumseh voted to opt into allowing cannabis retailers in the town.

What's in your illicit cannabis? A lot of bacteria, pathogens and arsenic, according to a research report carried by British Columbia's Cannabis Legalization and Regulation Secretariat. The study took samples from 20 dried flower products sourced from the illicit market and checked to see if those same samples would be considered fit for sale and met regulated consumption standards. Of those 20 samples, only three met the criteria to be sold, the study found. Only two samples contained no pesticide residue, a frequency described as "striking" when compared to legal cannabis. "Don't buy illicit cannabis, because you don't know what's in it and it may be contaminated," B.C. Minister of Public Safety and Solicitor General Mike Farnworth told reporters.

The Green Organic Dutchman Holdings's $229 million Quebec facility – mired in cost overruns and construction delays – has been sold to Cannara Biotech, the companies both said in a statement. TGOD sold the facility for $27 million – which at one point was said to have an original annual production capacity of 185,000 kilograms  – but also entered an agreement to lease a portion of the facility back for a two-year period. Once the sale closes, TGOD will pay off $31.8 million of debt to its senior lender. Canaccord Genuity Analyst Derek Dley said in a note that the sale lowers ongoing overhead and interest costs, and the company could continue to offload assets including its HemPoland subsidiary.

Quebec booked a $66.5 million profit from its provincial cannabis business in fiscal 2020, more than double what it made a year earlier, the Société québécoise du cannabis (SQDC) said on Wednesday. The province sold a total of 91,529 kilograms of cannabis in fiscal 2020, an increase from the 46,863 kgs it sold in the prior year. Roughly $171.4 million in consumer and excise taxes were collected by Quebec, with nearly 30 per cent heading to the federal government, the SQDC said. Over the next year, the SQDC plans to "continue expanding its store network and applying sound management practices to control costs across the company," without providing specifics.

The NFL is pledging as much as US$1 million in grant money toward research into alternative pain medications to opioids, which includes cannabis, in a effort to help better treat injured athletes. Bloomberg News reports the NFL is particularly interested in learning more about cannabis and CBD, given how players have turned to the drug to help manage pain. The announcement comes as some former NFL players admitted to becoming addicted to opioids and other painkillers following years of injuries sustained during their careers. Prior to last year's collective bargaining agreement, the NFL would typically suspend a player if they tested positive for cannabis multiple times. "When we talk about having elite athletes use CBD to treat pain, we want to make sure it's, No. 1 safe, and No. 2 efficacious. I don't think we're at that point yet," said Kevin Hill, the co-chair of the NFL's pain management committee and a director of addiction psychiatry at Beth Israel Deaconess Medical Center. 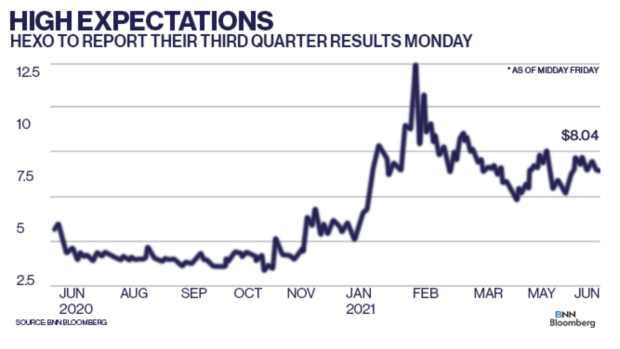 Desjardins Securities Analyst John Chu expects that Hexo's third-quarter sales will come in around $36.5 million, slightly above what the $34.5 million consensus when the Ottawa-based pot producer reports Monday. But the main storyline to keep a close eye on is whether Hexo can continue booking positive adjusted EBITDA after hitting profitability for the first time in its prior quarter, Chu said. Hexo's fiscal third quarter could also feel the ripple effects of pandemic-related lockdowns felt by many of Canada's legal cannabis retailers, he added. Truss – Hexo's beverage joint venture with Molson Coors – will also show how its first sales of its CBD-infused drinks in the U.S. (only in Colorado) have fared, while the pot producers Original Stash value brand could see ongoing market share erosion in the quarter, Chu notes. Other things to watch out for include more colour on Hexo's acquisitions of Redecan and 48North and any signs of the company may look for additional financing. To read more about Hexo, click here.

CANNABIS SPOT PRICE: $5.57 per gram -- This week's price is down 0.8 per cent from the prior week, according to the Cannabis Benchmark’s Canada Cannabis Spot Index. This equates to US$2,090 per pound at current exchange rates.

- The amount of people in Quebec that purchase their cannabis from the legal market, according to the Société québécoise du cannabis (SQDC). Crossing over the 50 per cent threshold less than three years after legalization surpassed the province's goal set out its Strategic Plan 2020-2023.