Cathie Wood has just missed out on a blistering rally in Virgin Galactic Holdings Inc., in a rare misstep for one of Wall Street’s biggest proponents of futuristic technologies.

As Virgin Galactic’s dramatic rebound gathered pace in the last three days -- culminating in a 28 per cent surge on Monday -- her firm Ark Investment Management slashed its remaining stake to just 45 shares, according to data compiled by Bloomberg.

The money manager has been gradually selling from May, after Richard Branson’s space-travel company plunged on technical issues and rising competition from rivals funded by Jeff Bezos and Elon Musk.

It held more than 1.7 million shares worth over US$100 million when the company notched its all-time high in February. By the start of May, with Virgin Galactic down more than 60 per cent, it had boosted holdings to more than two million shares valued at US$45 million. 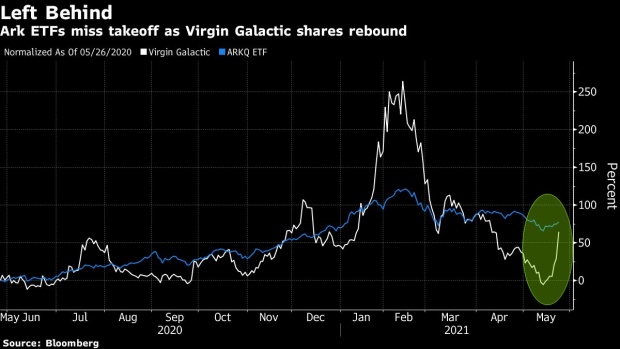 Virgin Galactic remains more than 50 per cent down from records, but in less than two weeks has rallied 73 per cent thanks to a successful test flight that’s reviving confidence in its ambition to commercialize space tourism.

The Ark Autonomous Technology & Robotics exchange-traded fund (ticker ARKQ) held the bulk of the New York-based asset manager’s Virgin Galactic shares, but has now sold them all. The Ark Space Exploration & Innovation ETF (ARKX), which was started in late March, held more than 220,000 shares worth almost US$7 million shortly after its launch. It now holds the remaining few shares, worth about US$1,200.

An Ark representative didn’t immediately respond to a request for comment.

The Dave Portnoy-backed fund, which picks stocks based on favorable sentiment detected in social media and blogs, sold its remaining shares in Branson’s company last week, the data show.