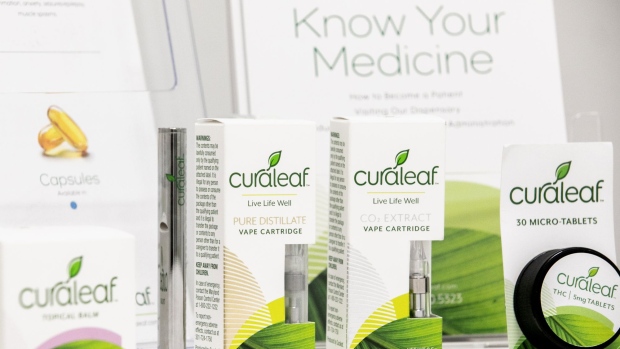 Curaleaf products for sale at the company's store in the Queens borough of New York. , Bloomberg

CBD, the trendy cannabis extract increasingly used to relieve pain, anxiety and insomnia, is attracting the interest of the biggest consumer-health companies.

The venture formed by pharma giants GlaxoSmithKline Plc and Pfizer Inc. is studying CBD as part of an effort to ensure it’s the No. 1 consumer pain relief company in the world, Chief Executive Officer Brian McNamara said in an interview Thursday after the companies announced the transaction was complete. The new entity hasn’t made any decisions, he said.

“The science is young in the space, but we realize it’s something consumers are using in their repertoire, so we are looking at it,” McNamara said. “Whatever we do, we really want to make sure it delivers on the promise to consumers and delivers real benefit.”

CBD, which doesn’t produce a high, has gained in popularity as regulations ease, turning up in a number of consumer products, including candies, lip balm and mascara. CVS Health Corp. (CVS.N) earlier this year began selling the product at more than 800 stores as part of a distribution deal with Curaleaf Holdings Inc. And the interest extends well beyond the U.S.

“Europe’s cultivation capacity and processing infrastructure will quickly put the region on par with the North American market for hemp CBD products,” according to a recent report by Prohibition Partners. “However the battle for control and classification of the category will intensify as major pharmaceutical companies enter the space.”

While the benefits of most CBD-based products remain to be proven in tests, research firm Brightfield Group estimates the U.S. market will reach almost US$24 billion by 2023. Big Tobacco is getting involved in cannabis too. U.K. cigarette maker Imperial Brands Plc acquired a stake in Canadian pot firm Auxly Cannabis Group Inc. last week to try to capitalize on the expansion of cannabis-based vaping products in Canada.

Rival firm British American Tobacco Plc has a team looking at cannabis, but will take its time before deciding what to do, Chief Executive Officer Jack Bowles said by phone Thursday. “It’s something we are looking at very seriously. We’re doing our homework, and we will come to the market at the right time.”

Canada’s Tilray Inc. last year signed a global partnership with the Sandoz division of Swiss drug giant Novartis AG to develop and distribute medical marijuana in legal jurisdictions around the world. Alcohol companies have been the fastest movers, with Constellation Brands Inc. owning about a third of Canopy Growth Corp. and Anheuser-Busch InBev NV researching cannabis beverages with Tilray through its Canadian unit.