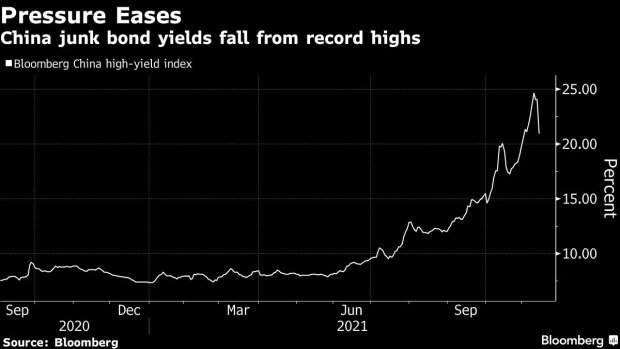 Construction cranes by unfinished buildings at China Evergrande Group's Health Valley development on the outskirts of Nanjing, China, on Friday, Oct. 22, 2021. China Evergrande Group pulled back from the brink of default by paying a bond coupon before Saturday’s deadline, giving the property giant at least another week to come to grips with a debt crisis that has rattled investor confidence in the world’s second-largest economy. Photographer: Qilai Shen/Bloomberg , Bloomberg

China Business News cited unidentified sources close to Evergrande as saying Hui raised the funds from the disposal of personal assets and share pledges. That comes as his associate pledged two houses on the Peak in Hong Kong as collateral for a HK$821 million ($105 million) loan, which may help pay for overdue coupons on two bonds, according to Bloomberg Intelligence analysts led by Daniel Fan.

Focus turns to Wednesday’s deadline for a Yango Group unit’s dollar bond exchange offer, after the company warned that without more time it “may not be able to repay” existing bonds at maturity. The firm cited deteriorating consumer sentiment and “multiple credit events” resulting in the closing of refinancing venues that has pressured its liquidity. Investors in general remain wary, moving to pare risk Tuesday after a recent rally, as Chinese high-yield junk notes declined 2 to 3 cents on the dollar.

Brokers such as Citigroup and CICC are turning more positive on China’s property sector. But with home prices slumping and some firms selling stock at wide discounts, there’s a long road ahead.

The new fund will make both public and private investments across geographies and sectors, including direct loans, investing in out-of-favor industries and pursuing market dislocations, according to Oaktree’s announcement.

One of Asia’s oldest hedge funds, LIM Advisors, is picking up distressed bonds of Chinese developers as the fallout from China Evergrande Group deepens.

George Long, the firm’s founder and chief investment officer, said LIM has been snapping up a “little bit” of such debt but is staying away from bonds of Evergrande because of its complex structure with both offshore and onshore securities and risks that can’t be gleaned from the balance sheet.

A German solar carmaker with no sales and ties to troubled China Evergrande Group is tapping the electric-vehicle frenzy that has gripped initial public offering markets across the globe.

Sono Motors, which has developed an electric car with integrated solar panels to power its batteries, is seeking a valuation of more than $1 billion in a U.S. listing. One catch: It plans to outsource production to a former Saab factory in Sweden that’s now owned by Evergrande’s automotive arm. And there’s its lack of revenue, as well as doubts about the viability of solar-powered vehicles.