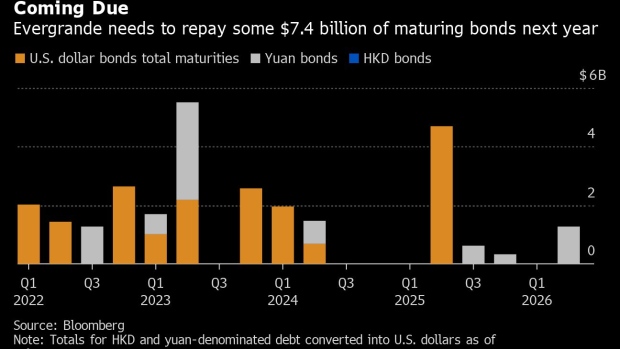 (Bloomberg) -- Regulators in Beijing have signed off on a China Evergrande Group proposal to renegotiate payment deadlines with banks and other creditors, paving the way for a temporary reprieve as the cash-strapped developer struggles to come to grips with more than $300 billion of liabilities.

China’s Financial Stability and Development Committee, the nation’s top financial regulator, gave its blessing to Evergrande’s plan last month after the property giant missed interest and principal payments on some loans, a person familiar with the matter said, asking not to be identified discussing private information.

Evergrande has already contacted some banks and trusts to request deadline extensions, four people said. It’s unclear how many of those discussions have led to agreements and whether the company intends to delay payments to bondholders.

The development suggests Evergrande has regulatory backing to negotiate with creditors on a piecemeal basis, as it tries to ease a cash crunch that has unnerved investors in China’s $12 trillion bond market. While the company’s main banks had discussed setting up a creditor committee as recently as last week to consolidate repayment decisions, lenders and regulators have decided to give Evergrande more time to solve its liquidity crisis before taking more drastic measures, people familiar with the matter said.

Evergrande’s complex web of obligations to banks, bondholders, suppliers and homeowners has become one of the biggest sources of financial risk in the world’s second-largest economy. While China’s government has publicly urged the company to solve its debt problems, officials have yet to spell out whether they would allow a major debt restructuring or bankruptcy. Speculation over Evergrande’s fate has fueled outsized swings in its shares and bonds, with the latter rising from record lows on Thursday.

Some lenders have indicated a willingness to be flexible on payment deadlines. Bloomberg reported last month that China Minsheng Banking Corp., China Zheshang Bank Co. and Shanghai Pudong Development Bank Co. had agreed to give Evergrande extensions on some project loans. Citic Trust, one of the developer’s biggest non-bank lenders, has given preliminary approval to a three-month extension on loans that were due in August, a person familiar with the matter said.

Evergrande and the People’s Bank of China, where the general office of the FSDC is located, didn’t immediately respond to requests for comment. Nor did representatives at Minsheng Bank, Zheshang Bank, Shanghai Pudong Development Bank and Citic Trust. REDD reported late Wednesday that Evergrande plans to suspend interest payments on loans from two banks due Sept. 21, adding that the developer asked one lender to wait for details on a proposed extension plan.

Meanwhile, bond investors have been pricing in a high likelihood of default. Even after Thursday’s rally, Evergrande dollar notes due next year are trading at just 27 cents on the dollar.

Whether the company’s troubles infect the broader credit market may depend on the company’s ability to buy time with banks. A messy default on loans could stoke fears of widespread contagion, something Xi Jinping’s government has been keen to avoid even as it tightens financing restrictions on overstretched developers and discourages government bailouts.

The stakes are high for Evergrande creditors. The company’s borrowings totaled 716 billion yuan ($111 billion) at the end of December, with nearly half due in less than a year. It owes about 830 billion yuan in trade and other payables to suppliers, and has received down payments on yet-to-be-completed properties from more than 1.5 million homebuyers.