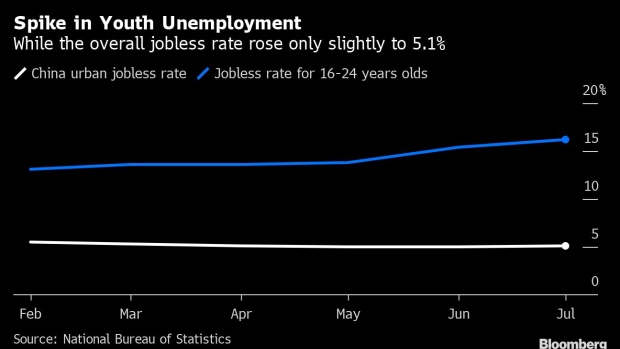 Commuters wait at a traffic intersection in Beijing, China, on Wednesday, Aug. 25, 2021. China's Communist Party vowed to promote the welfare of all people and redistribute income, underscoring its push to achieve "common prosperity" in the country. Photographer: Qilai Shen/Bloomberg , Bloomberg

(Bloomberg) -- China’s economy likely slowed further in August, with data on consumption, industrial output and investment due Wednesday to reveal the extent of the damage caused by an outbreak of the delta variant.

The extent of the slowdown will be closely watched for sign that it’s serious enough to prompt authorities to change their current stance of slowly withdrawing liquidity from markets and keeping stimulus limited. The ongoing regulatory crackdown on sectors like education, the internet and property may have exacerbated the recent economic weakness.

The Wednesday data will likely show China’s recovery remains uneven. Strong global demand led to record exports in August but domestic consumers turned cautious as lockdowns and fear kept many at home, meaning the industrial sector is expected to have fared better than retail sales.

To better gauge China’s economic performance, here’s a guide to what to watch for in the data:

Consumption took the hardest hit in August as the Covid-19 delta variant spread across China, forcing the closure of tourist spots and some cities during the summer holidays. However even before those outbreaks, China’s consumption rebound was not solid.

Indicators of the services industry painted a bleak picture for August, with both official and private gauges pointing to the first contraction since early 2020.

Although China now has the outbreak under control and has relaxed most restrictions, the impact on consumer spending will likely linger and the incomes of service providers will take a long time to recover.

Government measures to curb soaring house prices and also the worsening situation at China’s largest property developer likely cooled property investment further. Authorities haven’t stepped in to open the credit taps to support real-estate demand and construction, and there’s no indication yet that will change, with the government aiming to make housing more affordable as part of efforts to reduce inequality.

Home sales sales in the four first-tier cities declined 16% in August from a year ago, according to Bloomberg calculations based on weekly data. What happened with property investment nationwide will be key for the economy, as 28% of gross domestic product is related to the property sector, according to Bank of America economists.

China used to rely on debt-fueled construction to boost growth, but infrastructure investment has disappointed this year, even as the slowdown has sparked hopes for more government action. In July, spending on roads and other infrastructure shrank the most since the pandemic last February, dragged down by the slow pace of borrowing by local governments.

The finance ministry in late August urged local government to speed up the issuance of special bonds and make good use of the proceeds. While sales of government debt in August were the highest they’ve been all year, it will take time before the effect of any increase in bonds sales shows up in the investment data. Investment is expected to pick up in the coming months but a lack of good projects and local governments’ pressure to cut debt could make the outlook for spending less optimistic.

Although China’s overall jobless rate has stabilized at pre-pandemic levels, the youth unemployment rate has hovered at an elevated level this year. Authorities have repeatedly emphasized the urgency of this issue and pledged targeted measures to help graduates find jobs or start their own businesses. With the graduation season coming to an end, seeing how many of the 9.1 million fresh graduates have been absorbed by the labor market will be key.

Policy makers have so far refrained from large-scale stimulus this year, instead resorting to some low-profile tools to increase credit supply to parts of the economy, especially small businesses. With the latest wave of Covid, surging production costs, and a likely slowdown in exports, some economists are calling for more action to support growth.

Any change in the statistics bureau’s assessment of the current economic operations and policy outlook is worth looking at. In previous reports, it had consistently stated that the momentum of the steady recovery was sustained, despite a number of downside risks.

The People’s Bank of China is also likely to announce the rate for 1-year loans to banks Wednesday morning, when 600 billion yuan ($93 billion) of lending matures, but there is no expectation the bank will cut the rate if it does make any loans.