China’s economy slowed to the weakest pace since quarterly data began in 1992 amid the ongoing trade standoff with the U.S., while monthly indicators provided signs that a stabilization is emerging.

Gross domestic product rose 6.2. per cent in the April-June period from a year earlier, below the 6.4 per cent expansion in the first quarter. In June, factory output and retail sales growth beat estimates, while investment in the first half of the year also gave further evidence that stimulus measures to curb the slowdown are feeding through. 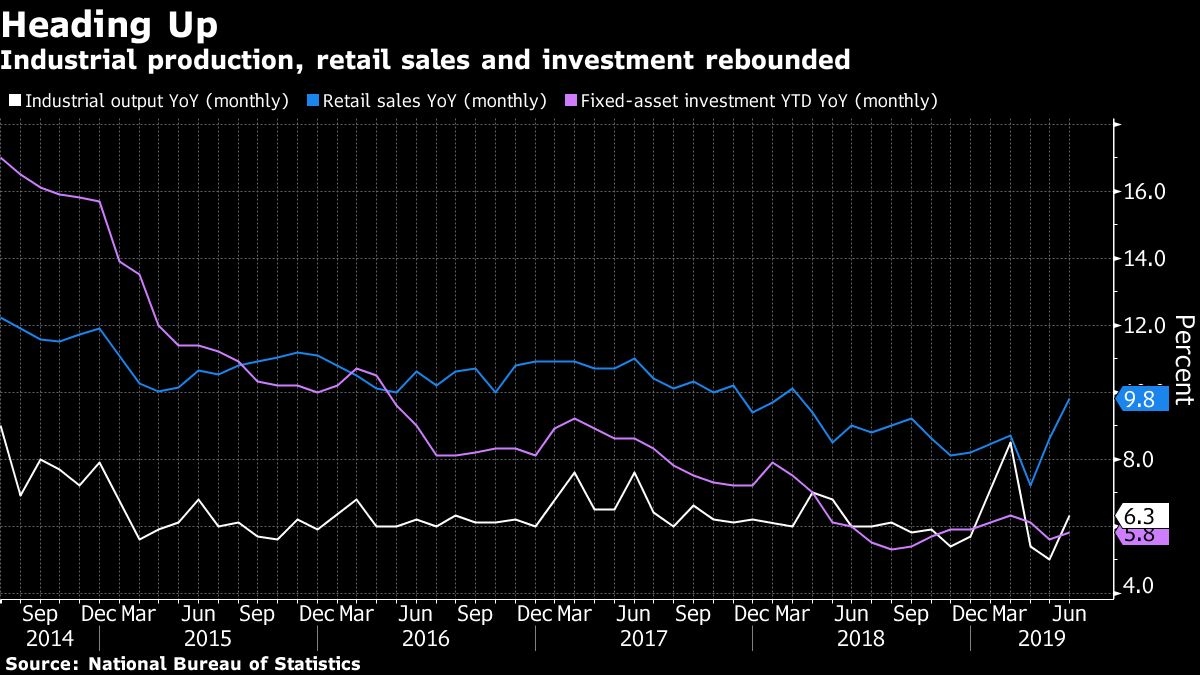 The slowdown underlines the pressure that Chinese policy makers face as they attempt to negotiate a deal with the U.S. on trade, while the economy takes another step down in the long-term deceleration from the heady expansion of the mid-2000s. Although Chinese negotiators are talking with U.S. counterparts again, there is no certainty that a deal will be reached in time to prevent further economic damage.

“We continue to see the second-quarter growth slowing, but I think we are seeing the stabilization,” Wang Tao, chief China economist at UBS AG in Hong Kong, said in an interview with Bloomberg TV. “The central bank needs to be a bit more proactive” going forward with additional reserve-requirement ratio reductions if higher tariffs come in, she said.

Net exports contributed to 20.7 per cent to output growth in the first half, down from 22.8 per cent in the first quarter. Trade data released Friday in Beijing detailed the weak end to the second quarter, as exports and imports fell. The surveyed urban jobless rate ticked up to 5.1 per cent from 5.0 per cent.

China’s 2nd Quarter growth is the slowest it has been in more than 27 years. The United States Tariffs are having a major effect on companies wanting to leave China for non-tariffed countries. Thousands of companies are leaving. This is why China wants to make a deal....

....with the U.S., and wishes it had not broken the original deal in the first place. In the meantime, we are receiving Billions of Dollars in Tariffs from China, with possibly much more to come. These Tariffs are paid for by China devaluing & pumping, not by the U.S. taxpayer!

“Concerns over global growth slowdown and the persistence of U.S.-China trade war would continue to cloud the economic outlook. In the domestic market, whether the rebound in retail sales growth is sustainable is still uncertain.”

Fixed asset investment growth in the first half accelerated at private firms, whereas state companies eased back, a further sign that government efforts to funnel cash to the private sector may be bearing fruit.

For the manufacturing sector, investment accelerated a notch to three per cent in the first half, while infrastructure investment also picked up to 4.1 per cent. 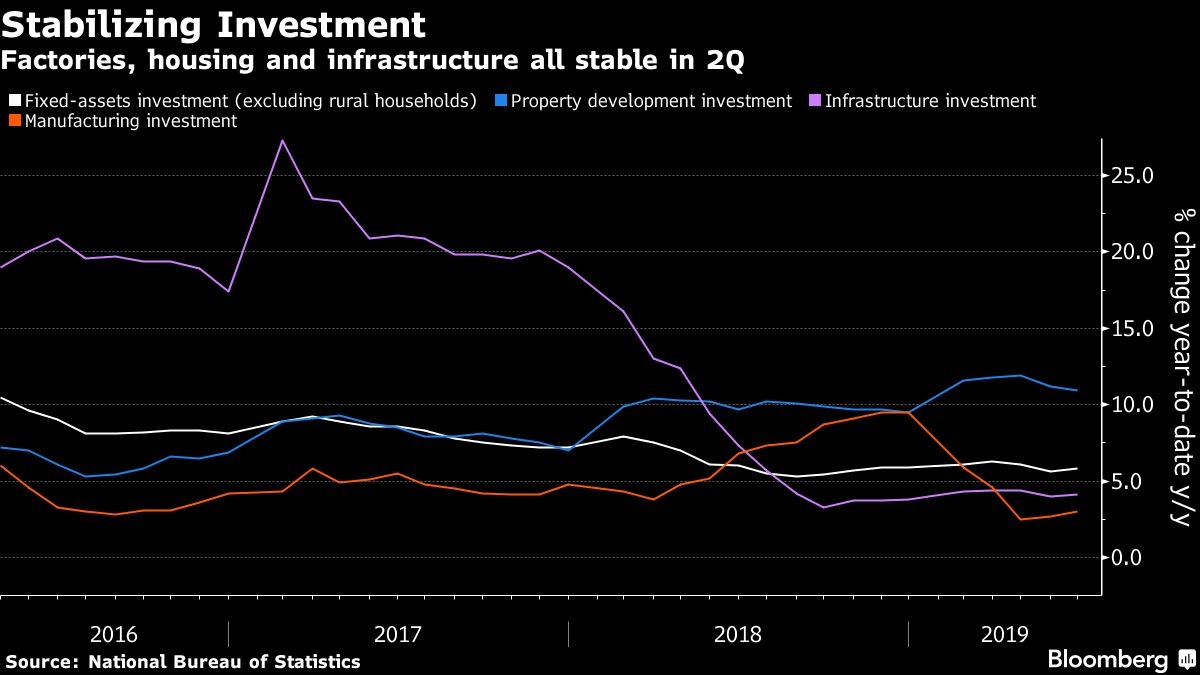 Better-than-expected retail sales data also lend credence to the idea that stability will emerge in the second half of the year. While the data are volatile, faster growth in sales of consumer goods, household appliances and furniture also point to the modest recovery ongoing in the vital property sector.

The overall retail sales result was also driven by robust auto sales growth, though with heavy discounts attracting buyers in June economists remain cautious on whether that upturn can be sustained.

A fiscal stimulus plan including about two trillion yuan (US$291 billion) of tax cuts is slowly feeding through into the economy. The government has stepped up efforts recently, easing the rules for using government debt in some infrastructure projects and pledging to renovate hundreds of thousands of old buildings.

“We can take comfort in that the expansionary measures by the government are actually working,"said Mary-Therese Barton, head of emerging market debt at Pictet Asset Management SA, speaking on Bloomberg TV. "So we take a lot of heart in the retail sales data, in particular, and the strength of domestic consumption.”

Amid concerns about emerging price bubbles and risks in the financial sector, officials are likely to keep the recovery in the property market tightly controlled. Property development investment slowed for a second month in June, dragging down the growth of newly started property construction and inventory.

Until now, China’s leadership is tolerating the continued deceleration in the economy while the official unemployment rate remains low, and monetary policy has remained supportive without flooding the financial system with cash. Further tweaks to cement any nascent stabilization could be announced following a meeting of top leaders this month.

“China’s economy in the third quarter may face more downward pressure,” said Larry Hu, head of China economics at Macquarie Securities Ltd. in Hong Kong. “There probably won’t be any obvious policy adjustment in July, but more possibilities of change in the fourth quarter.”

--With assistance from Tomoko Sato and Wendy Hu