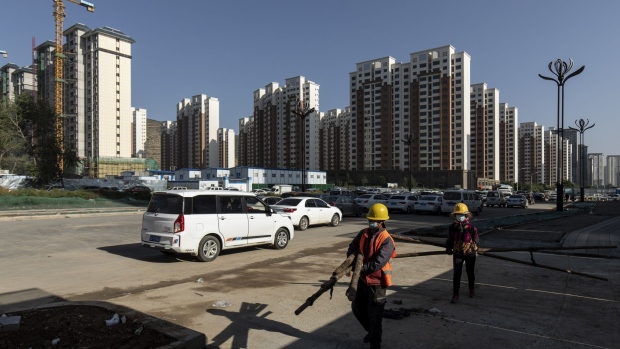 Workers carry wooden poles near apartment blocks under construction in the Nanchuan area of Xining, Qinghai province, China, on Tuesday, Sept. 28, 2021. China has urged financial institutions to help local governments stabilize the rapidly cooling housing market and protect the rights of some homebuyers, another signal that authorities are worried about fallout from the debt crisis at China Evergrande Group. Photographer: Qilai Shen/Bloomberg , Bloomberg

(Bloomberg) -- China can contain risks posed to the nation’s economy and financial system by China Evergrande Group’s debt crisis, according to central bank Governor Yi Gang, amid deepening concerns for other developers.

The property firm’s troubles “casts a little bit of concern,” Yi said at a virtual meeting of the Group of 30 on Sunday. “Overall, we can contain the Evergrande risk.” The comments came after the People’s Bank of China on Friday broke its silence on the crisis, saying risks were controllable and unlikely to spread.

Amid signs of authorities’ growing unease about rising contagion risk from Evergrande’s liquidity woes, China is loosening restrictions on home loans at some of its largest banks, according to people familiar with the matter.

The Ministry of Finance plans to raise $4 billion from the offering in Hong Kong on Tuesday, a third less than the $6 billion in each of the past two years and the least since 2018, according to Bloomberg-compiled data.

People’s Bank of China Governor Yi Gang said authorities can contain risks posed to the Chinese economy and financial system from the Evergrande’s struggles. He was speaking at a virtual meeting of the Group of 30 on Sunday.