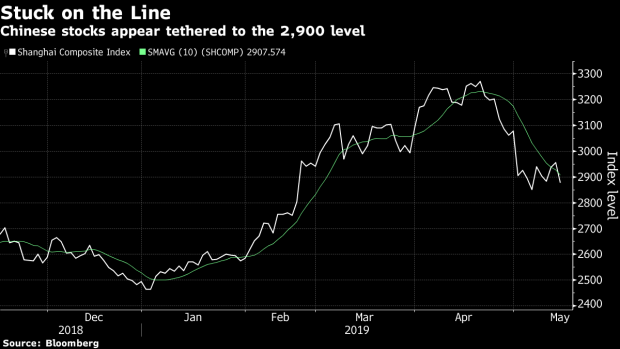 (Bloomberg) -- Chinese financial markets are ending the week on a low note, with the Shanghai equities benchmark slumping along with the yuan amid concern there’s no end in sight to the trade war.

The Shanghai Composite Index slid as much as much as 2.8% on Friday to cap its fourth week of declines, the longest losing streak in 10 months. Recent trading has been bumpy, with some outsized one-day moves, although the gauge has remained near the 2,900 level. The offshore yuan slid as much as 0.24% to 6.9450 per dollar, its weakest level since November before paring declines after Reuters reported the central bank will support the currency.

There’s little sign of a resolution to the trade tensions between the Washington and Beijing, with Chinese state media signaling a lack of interest in resuming talks and the Trump administration threatening to blacklist Huawei Technologies Co. from buying essential components. Mainland investors are rapidly losing interest in what was a fizzing stock market earlier this year, with turnover sliding.

“Investors can’t see a clear picture right now on the trade talks and there’s great uncertainty over whether the two parties will continue their negotiations,” said Zhu Junchun, a Shanghai-based analyst with Lianxun Securities Co.

Overseas investors, who have been fleeing mainland stocks at a record pace this month, were net sellers again Friday. They’ve dumped 36.4 billion yuan ($5.3 billion) of Chinese shares this month via exchange links, according to Bloomberg compiled data.

The offshore yuan dropped 0.06% to 6.9330 per dollar, while the onshore rate was 0.3% lower at 6.9039. The PBOC will use foreign exchange intervention and monetary policy tools to make sure the yuan does not weaken past 7 per dollar in the immediate term, Reuters reported, citing three unidentified people familiar.

To contact Bloomberg News staff for this story: Amanda Wang in Shanghai at twang234@bloomberg.net

To contact the editors responsible for this story: Sofia Horta e Costa at shortaecosta@bloomberg.net, Richard Frost