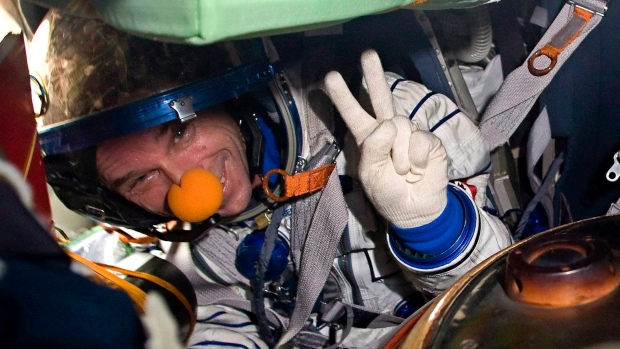 Space tourist Canadian billionaire and clown Guy Laliberte shows A victory sign while sitting inside the Soyuz TMA-14 spacecraft shortly after his landing with the members of the main mission to the International space station, Russian cosmonaut Gennady Padalka and NASA astronaut Michael Barratt, not seen, near the town of Arkalyk, Kazakhstan, on Sunday, Oct. 11, 2009. , The Canadian Press

MONTREAL -- The billionaire founder of the Cirque du Soleil is ending efforts to recover millions of dollars paid to Canadian tax authorities relating to his 2009 stay on board the International Space Station.

In a 26-page decision, Justice Mary Gleason agreed with the Tax Court of Canada that Laliberte's appeal may appear "unusual and exotic," but not when the case is considered on its merits.

Laliberte was trying to avoid having to pay tax on the $41.8-million bill that accompanied his space trip, by arguing that these were business expenses and not a personal stay.

Laliberte was Canada's first space tourist. He used his weightless journey to raise awareness of the problems linked to the accessibility of water in the world.

The tax court allocated the business portion of the trip at 10 per cent leaving the remaining $37.6 million as a taxable benefit.

Spokeswoman Anne Dongois says Laliberte was "disappointed" by the Federal Court ruling issued Friday, adding that the taxes were paid several years ago.