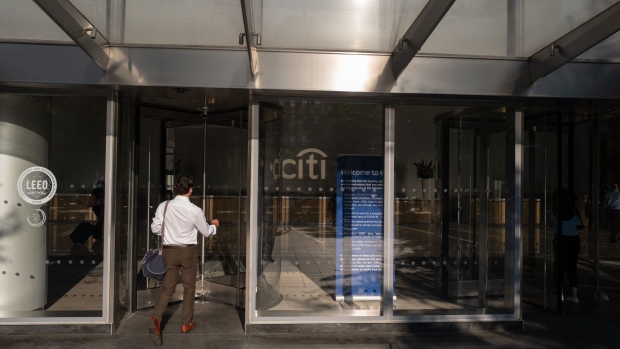 A worker enters Citigroup headquarters in New York, US, on Thursday, Aug. 4, 2022. Citigroup Inc. is planning a 500-person hiring spree over the next three years for a new wealth division catering to junior employees at private equity offices, consultancies and accounting firms, betting those clients will someday join the ranks of the ultra wealthy. , Bloomberg

The Boston-based investment firm says Citigroup’s global markets unit was serving as its broker in the purchase of almost 800,000 shares of Shopify Inc and sale of more than 5 million shares of Colgate-Palmolive Co. Despite being instructed to execute the trades in a manner that wouldn’t impact daily market prices, the bank allegedly placed the orders into an illiquid closing auction at the end of the day, on March 18.

Citigroup “failed to conduct any meaningful liquidity analysis,” and instead “flooded the market with those orders; caused artificial price dislocation” and “made no attempt to cancel or reduce the size of the affected orders pursuant to New York Stock Exchange rules,” according to the complaint, which was filed Saturday.

The complaint says that Loomis Sayles had told Citigroup that, in the event of insufficient liquidity, the order didn’t need to be completed on the same day.

Loomis Sayles, which oversaw about $291 billion as of June 30, alleges claims of breach of contract and fiduciary duty against the broker. The lawsuit seeks to represent 250 entities for whom Loomis Sayles served as an adviser or sub-adviser.

As a result of Citigroup’s actions, the price for Shopify surged in the closing auction by $90 a share, causing Loomis Sayles $60 million in “needless losses,” according to the suit. Meanwhile, the price drop caused by the sale of the Colgate shares resulted in $10 million of losses, the complaint says.

Colgate shares ended March 18 at a 3.9% loss from the prior day, while the price for Shopify stock jumped 19%.

Loomis Sayles is an affiliate of Natixis Investment Managers and is being represented by Foley Hoag LLP.