Real estate investors are piling into the condo market and taking advantage of low interest rates - even if it means withstanding short-term losses, according to a prominent Bay Street economist.

“It’s really about the supply-demand mismatch and people are looking at interest rates, they know… interest rates will rise,” Benjamin Tal, deputy chief economist at CIBC Capital Markets Inc., said in an interview. “So basically, they’re stealing activity from the future in order to be part of this low interest rate environment and take advantage of it.”

Tal, who developed the report in conjunction with real estate analyst group Urbanation to be released later this week, explained that investors are piling into the condo segment as it provides a more affordable entry into the real estate market than single, detached housing.

He said that the investors interviewed for the report are absorbing monthly losses, sometimes worth hundreds of dollars, for the longer-term value proposition. Data from CIBC found that about 40 per cent of condo investors had a negative cashflow. The investors said having a portion of their mortgage paid by someone else in the short-term will lead to profit as prices in hot markets like Toronto continue to climb.

And Tal believes they will continue to climb.

“If you think that Toronto is unaffordable now, you wait,” Tal said. “Toronto is becoming like Berlin, like London, like Manhattan. It’s becoming more and more unaffordable, and therefore we know that our kids will struggle.”

Condo sales have been taking off according to data from the Toronto Regional Real Estate Board (TRREB), up 85.5 per cent in January on a year-over-year basis. During that same time, prices had softened by 4.7 per cent. However, TRREB warns that the growth in condo sales outstripping the new listings growth may prompt a surge in prices, according to its market watch report. 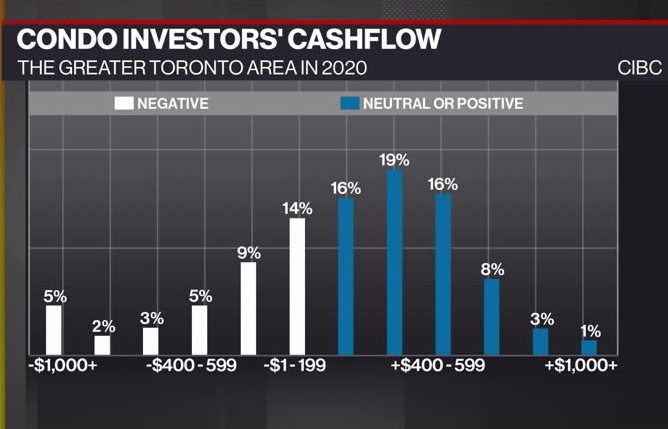