A senior Bay Street economist is calling out the federal government for being caught “off-guard” by frenzied housing market activity in major Canadian cities.

“The housing market is just off the charts … Ottawa has been caught completely off-guard in the magnitude of the housing response to very low financing costs.” wrote Derek Holt, Scotiabank’s head of capital markets economics, in a note for clients Tuesday. He added that the federal government could introduce so-called macroprudential regulatory measures in its upcoming budget to rein in the market.

A total of 10,970 homes were sold across the Greater Toronto Area (GTA) in February, representing a 52.5 per cent surge compared to a year earlier and setting a new record for the month, according to a release from the Toronto Regional Real Estate Board (TRREB) on Tuesday.

Supply came under the pressure during the month, with active listings slipping by one per cent.

That one-two punch of surging sales and eroding inventory propelled the average selling price 14.9 per cent higher year-over-year to $1,045,488 in February.

“It’s clear that the historic demand for housing experienced in the second half of last year has carried forward into the first quarter of this year with some similar themes, including the continued popularity of suburban low-rise properties," said TRREB President Lisa Patel in a release. 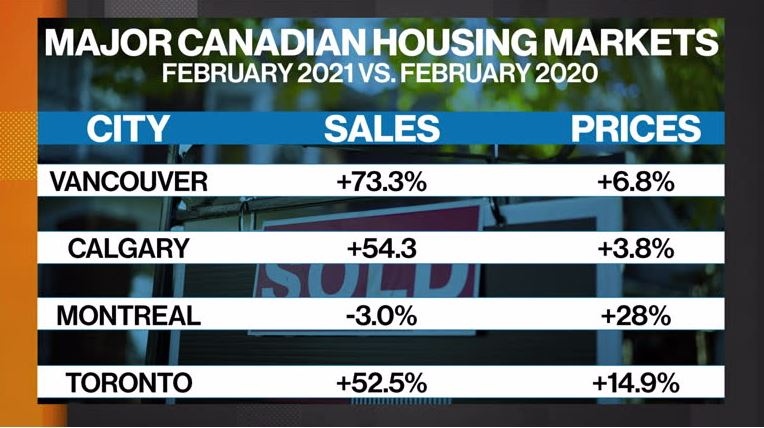 "It’s also evident that the supply of listings is not keeping up with demand, which could present an even larger problem once population growth picks up following widespread vaccinations later this year and into 2022."

The single-family detached property segment saw the strongest price growth, with the GTA average jumping 23.1 per cent year-over-year to $1,371,791. Prices rose at an even faster rate in the so-called 905 region that surrounds the City of Toronto, as the work-from-home trend continues to send buyers hunting for larger homes outside Canada's largest city.

Meanwhile, the condo market saw the most frenzied activity in February as sales surged 64.3 per cent in February compared to a year earlier.