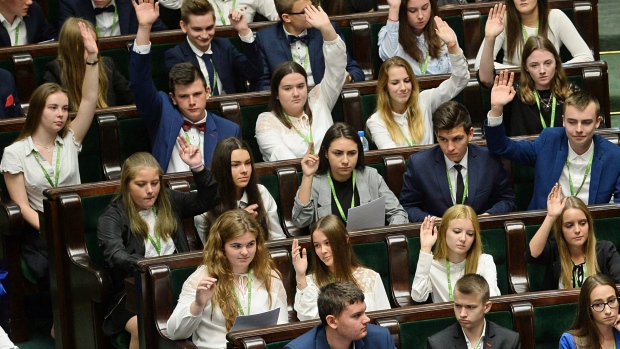 This is the year Gen Z takes over, and fusty companies that want to sell them stuff have to crack the kids’ code.

Good luck with that. Ziad Ahmed sees what a challenge it is every time he makes a presentation, as he did recently to some American Express Co. marketing executives. It was his “Gen Z Crash Course/Make a Meme Workshop,” and they drew blanks watching slides about the dialect spoken by the young. Esketit? O.T.P.? One guy took a stab. “Old Tired Person?” Ah, no. That stands for “one true pairing,” to describe a perfectly matched couple. Esketit, coined by the Gen Z rapper Lil Pump, means “Let’s get it.”

It’s a learning curve. “People are just starting to catch up,” says Ahmed, the 20-year-old chief executive officer of JUV Consulting, which sells expertise in his cohort, who are, according to the firm’s website, “sought after as customers and misunderstood as people.”

They belong to what this year becomes the biggest generation, 61 million strong in the U.S. alone, roughly between the ages of seven and 22, depending on how you crunch it. They were born after the internet went mainstream; the oldest were about 10 when the iPhone was introduced. “We are the social-media natives,” as Ahmed put it. They are distinct from the millennials before them—who were “digitally native” only—and they don’t shop the way their parents do. One estimate is that they already have direct spending power of as much as US$143 billion. And most of them are still in school.

“No one in this room is in the target group, so you haven’t seen any of the digital ads.”

Whatever the actual amount of money in the possible Gen Z spending pot, companies don’t want to—and can't afford to—blow it as many did with millennials. A common assumption was that those young people now in their 20s and 30s weren’t interested in the American tradition of consumption. Maybe they weren’t, but only because they were broke, having come of age during the 2008 financial crisis and following recession.

Automakers, for one, took the bait, rolling out smaller cars they figured that generation would go for, models being killed off now that more millennials are flush and hankering for gas-guzzling SUVs. Levi Strauss & Co. got it wrong too, which CEO Chip Bergh said hit home when his own millennial sons wouldn’t wear the brand. Kraft Heinz Co.’s jaw-dropping $15.4 billion writedown on stale brands last month helped frame just how wide the millennial miss was for some leading names.

People in generational cohorts are never as uniform as marketers would like. Still, to hear researchers and Gen Zers themselves tell it, this one will put a new spin on consumerism, making things difficult for the big, established chains.

One reason: Gen Z consumers don’t much care about brands. Or labels. Or corporations. They see themselves as entrepreneurial; around half may never work for someone else if they get their way. They’re ethnically diverse, socially tolerant, globally connected, environmentally aware. One nickname for the group: Philanthroteens.

They don’t much use e-mail or Facebook; think Instagram and YouTube instead. They’re into thrift-shopping and internet influencers. They sure don’t watch ads on TV, whatever that is.

They prefer word-of-mouth (preferably through meme or post or video) when it comes to enlightenment about what to buy, says Adam Grant, 33, the CEO of the marketing agency Campus Commandos. “What’s better than learning about a product or service than your friend?”

A survey of 11,000 U.S. adults by Bloomberg News and Morning Consult shows the generation is more willing than its predecessor to put its money where its values are. “If they’re paying money to corporations, they have to align with what they believe in,” says Corey Seemiller, an associate professor at Wright State University who became a lecturer on Gen Z after a student asked to skip a community-service requirement because she was running her own nonprofit.

Gen Z is expected to accelerate the shop-online trend, with an emphasis on subscription and customization, such as those from algorithm-driven businesses like the personal styling company StitchFix.

There is an ever expanding universe of choices. “You can walk away from one company to another,” Seemiller says. “For Gen Z, it’s less about the product and more about the organization.”

Church & Dwight Co.’s campaign on YouTube for its condoms tackles Gen Z’s approach to sex—and flexible preferences—with videos starring “Trojan Man,” who has a fro, wears flowing robes and says things like, “Sex is the sandwich, and you can put whatever you want on it.” CEO Matthew T. Farrell said on an earnings call last month that the company was excited about the potential of the ads’ appeal. He also recognized the people on the phone likely didn’t know what he was talking about. “Now no one in this room is in the target group, so you haven’t seen any of the digital ads.”

Another advertising tack: targeting Gen Z with the sounds—like whispers or slurps—that can trigger an autonomous sensory meridian response, also known as a brain orgasm. ASMR videos are huge on YouTube; they can be relaxing and may help you sleep after too many hours of stimulating blue light from your always-on screen. PepsiCo Inc. aired a commercial during the Superbowl with Cardi B doing her famous tongue-rolling “Okurrrr.” Anheuser-Busch InBev SA ran an ASMR ad during the game too, where Zoe Kravitz whispered at, tapped on and then poured a fizzy Michelob Ultra next to multiple microphones.

“Its harder for brands to have a straight ad now,” Grant says. “It’s so crowded out there.”

As brands chase Gen Z, more than a few will flub it, Ahmed says from the WeWork space in New York where JUV has its main headquarters, working with companies including Unilever, Edelman and Viacom. He gave an example: a client that resisted having a social media presence at a launch event because it didn’t want to encourage the generation’s dependence on it.

Back to that learning curve. “There’s this misconception that we’re scrolling mindlessly,” Ahmed says. What Gen Z’s actually doing is connecting and communicating and figuring things out—like where to spend their money.