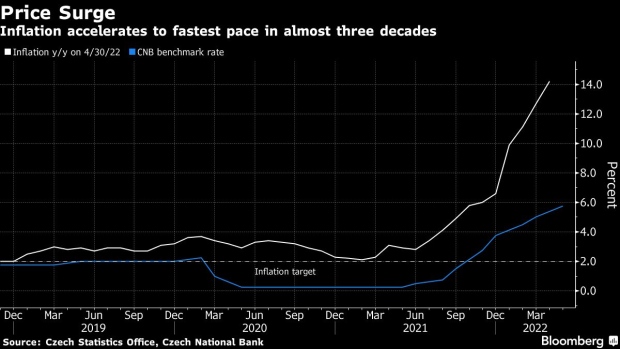 The Czech National Bank has lifted borrowing costs by a cumulative 550 basis points in eight steps since June last year. The latest move this month brought the benchmark rate to 5.75%, the highest since 1999.

Rusnok said on Sunday that the rate-setting panel will debate how economic data compare with the bank’s latest forecast at the next policy meeting on June 22, which will be his last before his term ends.

There is a “very high” probability that rates will rise again if inflation pressures develop as outlined in the bank’s spring projections, the governor said in a debate on public television. Since the forecast was published, data showed consumer prices growing an annual 14.2% in April, more than the central bank expected.

When asked whether the benchmark rate will rise above 6% next month, Rusnok said: “It may happen.”

The Czechs are experiencing the fastest inflation in nearly three decades as Russia’s invasion of Ukraine drives up energy and raw-materials prices. While the key manufacturing industry grapples with component shortages and the economy may stall this year as a result, central bankers are concerned about signs that high prices are becoming entrenched.

The Czech monetary outlook has become more clouded after board member Ales Michl, an opponent of the current rapid policy tightening, was appointed as the next central bank governor. Michl said he wants to keep rates stable for “some time” after he takes over in July. The remarks triggered a sell-off of the koruna.

President Milos Zeman, who has the sole right to pick central bankers, has echoed Michl’s critical views of the tightening. Zeman will decide on three board positions by the end of June, and an additional two by February.