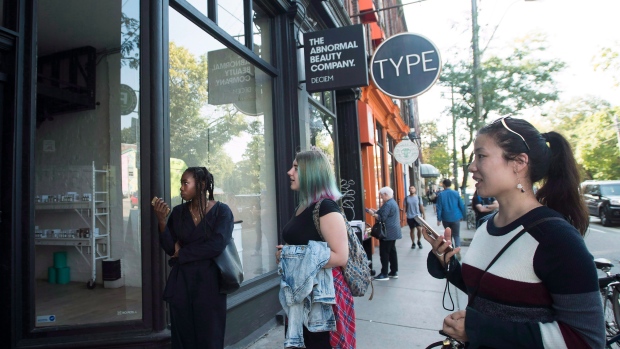 Beauty supply store Deciem after it closed all locations unexpectedly in Toronto on Tuesday, October 9, 2018. , THE CANADIAN PRESS/Nathan Denette

TORONTO -- Estee Lauder Companies Inc. has dealt another blow to the founder of Deciem, weeks after the cosmetics Goliath orchestrated his removal from the Toronto-based beauty brand he built.

The order also bars Truaxe from entering any Estee Lauder office and requires him to stay at least 300 metres from the residence of Estee Lauder executive Leonard Lauder and Andrew Ross, Estee Lauder's representative on the Deciem board of directors.

Truaxe did not appear in court or send a lawyer to act on his behalf.

The court order is the latest in a string of troubles that have befallen Truaxe and Deciem since early October, when Truaxe took to Instagram to announce Deciem operations would be shutting down until further notice and allude to criminal misconduct at the company.

The closure, in addition to hundreds of "outrageous, disturbing, defamatory, and/or offensive posts", were enough to prompt Estee Lauder to convince a judge to remove Truaxe from his executive roles at Deciem, prevent him from "issuing statements or circulating media" on Deciem's social media accounts and keep him from communicating with Deciem employees -- all on an interim basis. The order installed Nicola Kilner at the helm of Deciem and triggered the reopening of stores.

Estee Lauder's most recent court application reveals it sought its no-contact order after Truaxe sent a profane email to Lauder and Ross last Thursday, telling them he would soon be in their hometown and predicting the demise of Estee Lauder and the Lauder family.

"I am confident that you know the world will have never seen a downfall greater than that of the fraudulent empire ELC, the Lauder family and those related have built," he said, in the email.

Estee Lauder's application included a copy of a cease-and-desist letter it sent to Truaxe, noting that his missive was the latest in a string of "harassing and menacing" communications" Truaxe made to Ross, Lauder and "others."

Penny, who presided over the case, called Truaxe's email "highly offensive" and called his behaviour "bizarre and reckless."

Penny urged Truaxe to retain counsel "at the earliest opportunity".

Since Penny ruled in the case, Truaxe has taken to Instagram to post a handful of missives, including copies of Estee Lauder's application, photos of Snickers chocolate bars, messages to U.S. President Donald Trump and comments about Lauder, Estee Lauder and Deciem.

In the posts, he purports to be staying at the Trump Tower in New York, not far from Estee Lauder's offices.