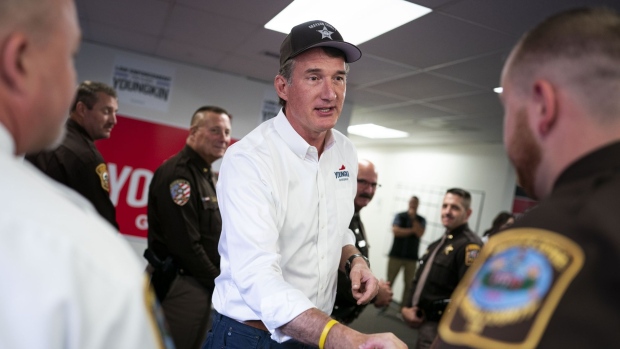 (Bloomberg) -- Democrats concerned by the tight race for Virginia governor are rushing to bolster Terry McAuliffe’s campaign in a state that could set the national momentum for the critical midterms and the 2024 presidential election.

So much is hanging on the race between former governor McAuliffe and Republican political newcomer Glenn Youngkin, a former CEO of the Carlyle Group Inc., that some of the Democratic Party’s biggest names are traversing the state on behalf of McAuliffe, a former Democratic National Committee chair.

But the fact that former President Barack Obama and Stacey Abrams, a Georgia politician credited with boosting Democratic turnout in the South, are working to turn out reliably Democratic Black voters shows the perilous waters McAuliffe is navigating. He’s battling voter exhaustion, Democratic complacency and an untested opponent who invites a “why not give him a try” attitude among centrist Democrats in Virginia.

McAuliffe’s steady lead early on in a state that has elected Democrats as governors and senators for a decade has been whittled down to a statistical tie in polls this month. Youngkin has threaded a needle with voters, accepting but not highlighting the support of former President Donald Trump and downplaying any attempts to paint him as a Trump supporter.

But Youngkin has cut into McAuliffe’s lead in the moderate state by portraying McAuliffe’s social policies as too radical. McAuliffe has tried to portray Youngkin as being in lockstep with Trump.

If Youngkin wins, it would give the Republican Party tailwinds heading into the midterms that will determine control of the U.S. House and with it, President Joe Biden’s legislative agenda. It would also give the GOP another Republican state from which to campaign for the presidency in 2024, and Trump would likely take credit for the win, since he has endorsed Youngkin several times.

Despite the establishment names supporting McAuliffe, he has openly criticized the Democratic disarray on Capitol Hill over Biden’s economic plans as a means to separate himself from voter dissatisfaction with congressional Democrats’ inability to raise the debt ceiling, pass an infrastructure bill and come to agreement on Biden’s social spending plan.

Democratic voters are suffering from “exhaustion” after helping Democrats win in the 2018 congressional mid-terms and then again in 2020, an election held during the coronavirus pandemic, said Mark Bergman, a Democratic strategist and adviser to Virginia Governor Ralph Northam.

“We know it’s going to be a close race,” Bergman said. “Voters are not apathetic about the race, just exhausted from politics,” he said. “Democrats nationally are going to be anxious no matter what for Virginia heading into a mid-term year.”

Youngkin has sought to distance himself from core Trump supporters, including a rally last week in which attendees pledged allegiance to an American flag connected to the Jan. 6 riot at the U.S. Capitol. Youngkin didn’t attend the event, but Trump phoned into it and reiterated his endorsement of the Republican challenger.

Republican political consultant Tucker Martin said that while Virginia has been trending toward Democrats, the party’s recent wins there were much more about opposition to Trump, who stirred the Democratic base while also turning off more moderate voters.

With Trump not on the ballot, the state is reverting to being closely divided, he said.

“Over the last four years, every election was a referendum on Trump,” Martin said. “Now that Trump is gone, you’re seeing a more typical governor’s race.”

McAuliffe, who won a similarly tight race in 2013 by painting his GOP opponent as an extremist, has done everything he can to tie Youngkin to Trump. In a recent appearance on MSNBC’s “Morning Joe” he argued that a Republican win in the state would boost Trump heading into next year’s midterms and a likely 2024 re-election bid.

“This will be the comeback of Donald Trump,” he said. “This will lift him off the mat.”

He has called for banning critical race theory, which isn’t taught in Virginia’s public schools; criticized the state’s Board of Education for weakening school accreditation standards; and opposed letting transgender girls play on girls’ sports teams, saying it was “not fair.”

And he’s capitalizing on a remark that McAuliffe made about school-board protests at a debate in late September, when he said parents shouldn’t be “telling schools what they should teach.”

After a controversial Texas law shut down the state’s abortion clinics, Youngkin said he wouldn’t have signed it, calling the law “unworkable.”

He has supported access to abortion in cases of rape, incest or the life of the mother and early in pregnancies. But he backs a fetal-pain law that would dramatically shorten the amount of time a woman can get an abortion and was caught on tape saying he’d go on offense on the issue as governor.

Longtime Democratic strategist Jesse Ferguson said Youngkin has missed opportunities to show that he could be a moderate Republican like Massachusetts Governor Charlie Baker or Maryland Governor Larry Hogan -- two popular governors in largely Democratic states who were outspoken against Trump.

“Whenever he’s had to make a decision, he’s made the wrong one in order to win a battleground state like Virginia,” Ferguson said.

Democrats have long held power in Virginia, but on presidential races, Obama snapped a 40-year losing streak for Democrats when he carried the state in 2008. It last elected a Republican governor in 2009, also the last year that it had a Republican U.S. Senator.

“If I were the Democrats, I’d be concerned, because this is a state where they should be doing better,” said Spencer Kimball, director of Emerson College Polling.

The race has already topped the record-breaking $65 million in Virginia’s 2017 gubernatorial contest.

Roughly half of Youngkin’s $35 million campaign war chest came from loans and contributions from his personal fortune. McAuliffe, a veteran Democratic fundraiser, has hauled in almost $32 million, including some large checks from donors like BET co-founder Robert Johnson and former Facebook Inc. president Sean Parker.

The late spending may be offset by widespread early voting, which was recently expanded. Since early voting began in mid-September, more than 369,000 Virginians have cast a ballot, more than the 195,634 who voted early in the 2017 election, according to the Virginia Public Access Project.

That includes the potentially decisive suburbs. Three congressional districts that include Washington suburbs in northern Virginia -- the 8th, 10th and 11th -- have cast the most ballots so far.

Ben Tribbett, a Virginia-based Democratic strategist, said Republican voters are especially energized for the election. It’s not a “persuasion election,” but about which side can turn out more of its base, he said.

“Republicans are completely engaged. That to me is the biggest threat: Republican turnout.” Tribbett said. “You’re going to see a lot of the Democratic activity over the next two weeks is really turning out voters.”