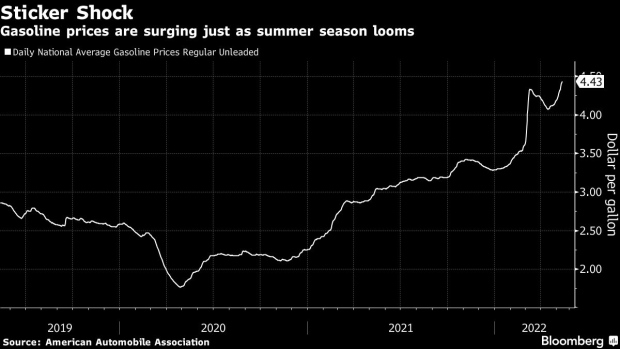 (Bloomberg) -- House Democrats are pushing the Internal Revenue Service to increase a tax break that would help truckers, Uber Technologies Inc. and Lyft Inc. drivers and other transportation-related businesses cut their tax bills as they struggle with soaring gasoline prices.

Businesses, gig workers and other proprietors are currently able to deduct 58.5 cents per mile as a business cost for federal taxes. Representatives Ruben Gallego of Arizona and Sharice Davids of Kansas, along with other Democrats asked IRS Commissioner Chuck Rettig to temporarily boost that amount, according to a letter obtained by Bloomberg News.

Delivery drivers and other small businesses are among those hit by a surge in gas prices of more than a dollar per gallon since the end of last year, when the IRS set the current annual mileage rate, the Democrats said in the letter.

The lawmakers asked for the more generous deduction to be retroactive to March 1, which was shortly after Russia’s invasion of Ukraine -- a crisis that’s contributed to the sharp increase in gasoline prices.

“Small business owners and rideshare drivers should not bear the brunt of rising gas prices caused by oil-company greed and Putin’s war in Ukraine,” Gallego said in a statement, referring to Russian President Vladimir Putin. “While Democrats in Congress work on solutions to ease the impact of these rising prices, we are also calling on the IRS to take executive action.”

Gallego said in an interview that the idea came after speaking with a driver while on vacation in Florida, who told him that the mileage deduction wouldn’t offset his expenses with higher gas prices. The lawmakers didn’t ask the IRS for a specific higher rate, though Gallego said he believes it should be increased to about 70 cents per mile, a nearly 20% bump from current levels.

The call for increasing the mileage deduction comes as congressional Democrats try to find ways to tamp down inflation before November’s midterm elections. The House is set to vote within days on a bill to ban oil companies from price gouging. But a narrowly divided Senate and House make it difficult to pass legislation.

The IRS effort wouldn’t require legislation, because the agency sets the mileage deduction amount annually, without direction from Congress. There’s also precedent for a mid-year change: the IRS increased the mileage amount in 2011 as gas prices rose.

The average price of a gallon of gasoline has risen to about $4.43 from $3.29 at the start of the year, according to data from the American Automobile Association.