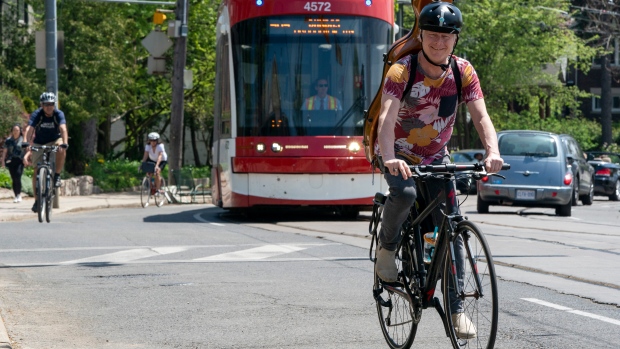 Cyclists ride up a hill with a TTC streetcar in Toronto on Saturday, May 23, 2020. COVID-19 is causing commuters to examine various modes of transportation that allow for physical distancing. The Canadian Press/Frank Gunn

But that all changed when the COVID-19 pandemic hit and suddenly roads, bike lanes, sidewalks and public transit were wide open as Canadians were mandated to stay at home.

With some employers looking to keep employees working from home — and ongoing virus transmission concerns associated with buses and subway trains — there could be big implications for commuter behaviour, traffic flow and the future of city road design.

Some experts agree the daily commute is probably not completely dead, but that there will be changes in the way some Canadians get around in the future.

“I was looking back through recently relevant events — SARS in 2003 and the 9/11 attacks — where we had really significant impacts on transportation systems and peoples’ travel and commuting patterns. But in all of those cases, we saw a bounce back,” Bruce Hellinga, civil and environmental engineering professor at University of Waterloo, said in a phone interview.

In a recent phone interview with BNN Bloomberg, former chief planner for the City of Toronto, Jennifer Keesmaat, said ultimately the “new normal” will likely involve a blend of working from home and going into the office.

Alex Bigazzi, an assistant professor in civil engineering at the University of British Columbia, thinks the notion of the “death of the daily commute” could be an overstatement because while most positions jobs can be done from home, many jobs can’t be done remotely.

“You tend to see a higher concentration of office workers going into the central business district so that’s a large portion of work from home,” he said via phone. “That’s also where the concentration of a lot of people going in the same direction at the same time working similar types of jobs is.”

“So I’d say the biggest proportional change will be heading in and out of the city centres in the morning and afternoon peak periods.”

However, Bigazzi believes the COVID-19 pandemic will likely have a bigger impact on transit systems than private vehicle use, mainly because the pandemic has resulted in a lack of fare revenue for transit agencies, service cuts, less capacity on transit vehicles and nervous riders.

In April, the Toronto Transit Commission (TTC) said the lockdown had led to an 85-per-cent drop in ridership and a loss of $90 million in monthly revenue during the lockdown, while Vancouver’s TransLink announced it was seeking emergency funding to offset losses of $75 million per month.

Once the financial toll of the pandemic is tallied, Bigazzi says many municipalities could be in financially-challenging positions, possibly leading to delayed or cancelled expansions and service enhancements.

He says that’s one of the biggest risks to the transportation system resulting from COVID-19.

Bigazzi believes certain governments, such as the big Canadian cities and New York in the U.S., might recognize the need to maintain a robust transit system and find a way to replace lost fare revenues, but that will be difficult for smaller towns to follow suit.

There will likely be an increase in driving from commuters that would normally take transit, according to Bigazzi. But he hopes to see a bigger, more permanent infrastructure push for so-called active transportation: walking and cycling.

Brent Raymond, a partner at architecture firm DTAH in Toronto who has expertise in street design, says we’re living in a moment in time where we can have a “sober second look” at our cities when it comes to active transportation infrastructure and the value of open park space.

Raymond has been involved in mapping out “complete streets” — streets that accommodate and consider the needs of the most vulnerable users such as pedestrians and cyclists.

“A lot of what happened in cities after World War II was we had to think about the driver first before anyone else and whatever was left over, you could fight over that,” he said via phone. “What we’re doing now is thinking about the safety and equity of the space we have to work with.”

“When I talk to other professionals in other parts of the world, they’re not thinking about how to completely transform our cities because of this.”