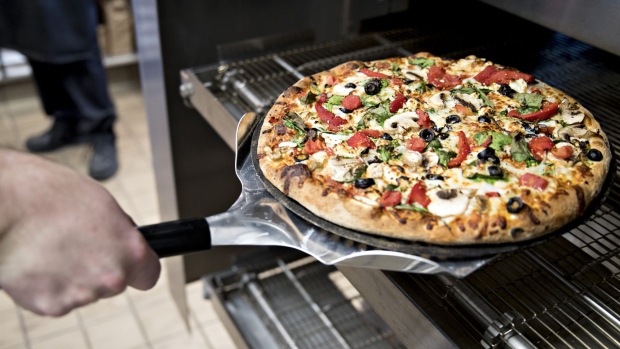 An employee removes a pizza from an oven at a Domino's Pizza Inc. restaurant. , Bloomberg

Domino’s Pizza Inc. (DPZ.N) dropped after posting sales growth in the U.S. that missed analysts’ estimates as competitors play catch-up by ramping up their own online ordering and delivery options.

The chain’s same-store sales in the U.S., a key metric in the restaurant industry, rose three per cent in the second quarter, trailing the 4.6 per cent estimate, according to Consensus Metrix. Its international comparable sales matched projections.

Domino’s has been under pressure to prove it can keep growing at the same vigorous clip since longtime leader Patrick Doyle retired last year. The company said Tuesday same-store sales in the U.S. grew for the 33rd straight quarter, but the pace has been slowing. The chain has continued adding restaurants, but sales of those may be eating into the business of older units.

Meanwhile, competition is getting hotter. Rival Pizza Hut has looked to take a bite out of Domino’s business with a US$5 menu along with beer delivery. Recovering chain Papa John’s International Inc.’s may also be making inroads with Starboard Value CEO Jeff Smith now serving at its chairman.

Like others in the industry, the pizza company is facing a tough restaurant market in the U.S.: Labor costs have been a headwind and meat prices look to be headed up later this year and into 2020.

The shares fell as much as six per cent in New York, the most since February. They had climbed 8.8 per cent this year through Monday’s close, less than half the gain of the S&P 500 Index.

--With assistance from Connor Corvino and Iris Zambrowski.