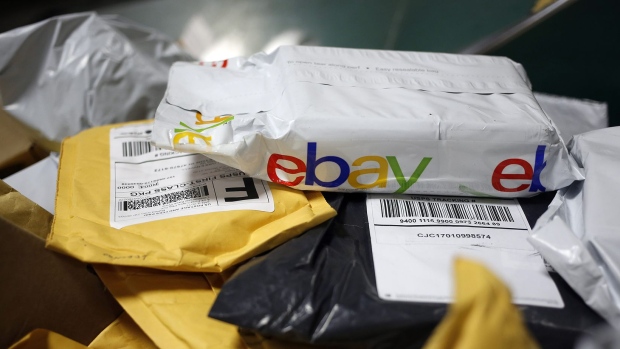 A parcel in eBay Inc. packaging is seen on a conveyor belt with other small parcels at the United States Postal Service. , Photographer: Luke Sharrett/Bloomberg

E-commerce companies have emerged as a favorite play on Wall Street during the coronavirus pandemic, amid a growing consensus that upcoming results will reveal a potentially permanent shift in consumer behavior toward online shopping.

While online sales have long been growing their market share as a percentage of overall retail spending, the trend has been accelerated as shutdowns force closures at brick-and-mortar rivals.

Analysts have said that the higher demand is likely to outlast the pandemic, especially in categories like groceries, which previously had less traction online.

Amazon.com Inc. has been perhaps the most high-profile winner of the current environment, with the company hiring tens of thousands of workers to meet demand. As a result of that higher demand, Wall Street has been growing steadily more optimistic about its prospects.

The company is scheduled to report first-quarter results next week, and analysts are looking for revenue of about US$73 billion, a consensus that has risen by 2.1 per cent over the past quarter. The average price target on the stock is US$2,479, up about US$300 from the end of 2019.

JPMorgan recently reiterated that Amazon was its top idea, writing that the pandemic was “accelerating online adoption in key categories like grocery and household items,” and that “much of this behavior will continue post-crisis.”

Earlier this week, Goldman Sachs wrote that the pandemic would “steepen the curve of [Amazon’s] long term growth rate, drive incremental profitability, and further deepen the competitive moat around all of its businesses.”

Shares of Amazon are up more than 40 per cent from a low hit last month, and it has nearly overtaken Apple Inc. in market capitalization.

Shopify is up more than 85 per cent from a low hit earlier this month, becoming one of the most valuable companies in Canada, while Wayfair has more than quintupled off a March low, having surged more than 400 per cent over the period. To compare, the SPDR S&P Retail ETF, an exchange-traded fund that tracks retail stocks, is down 25 per cent thus far this year.

While the pandemic has resulted in “significant uncertainty,” the biggest impact will be on traditional retail, Stifel wrote in a report on Wayfair. “The current conditions supporting stronger online demand in the home category will extend longer than we previously estimated.”

Shares of eBay are up nearly 50 per cent from a low hit last month, with the online auction company seen as another beneficiary of the current environment.

Guggenheim wrote that “a shift toward e-commerce from stores (given retail store closures during this pandemic) could drive upside” to Marketplace gross merchandise volume, while Stifel wrote that over the long term, “the economic fallout of this pandemic is likely to accelerate traditional retail dislocation.”

EBay is scheduled to report first-quarter results next week, with both Wayfair and Shopify reporting in early May.