The European Central Bank kept its monetary support for the coronavirus-stricken economy unchanged, betting that its recently scaled-up stimulus package is powerful enough to soften the impact of extended lockdowns.

President Christine Lagarde and her colleagues held the pandemic bond-buying program at 1.85 trillion euros (US$2.25 trillion), after a 500 billion-euro boost last month, and reiterated that it will run until at least March 2022.

They left the deposit rate at -0.5 per cent, and said they’ll continue providing “ample” liquidity through long-term bank loans.

Lagarde will hold a virtual press conference at 2:30 p.m. Frankfurt time, where she’s likely to be quizzed on her recent remarks that the economic projections her institution produced in early December -- including 3.9 per cent growth this year -- are still valid.

Europe is on the verge of a double-dip recession as governments toughen restrictions on travel, leisure and non-essential shops to combat a surge in infections. Germany, the region’s largest economy, decided this week to tighten its curbs and extend them until the middle of February.

Concerns have been heightened by the global spread of new variants of the coronavirus, while vaccination campaigns in the European Union have got off to a sluggish start. 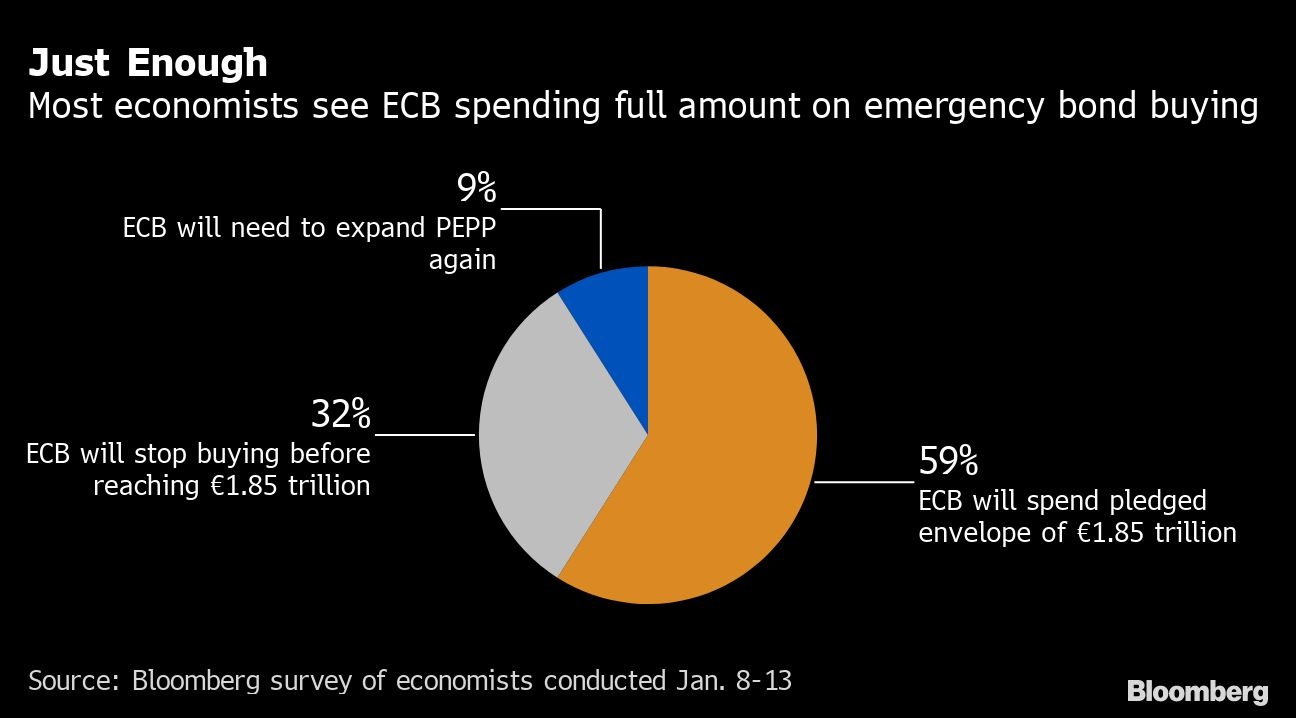 Still, Lagarde said last week that some uncertainties relating to Brexit and the U.S. elections have cleared, and that the ECB already assumed measures to limit the spread of the virus would be in place through the first quarter.

The president may also be quizzed on the persistently strong euro, which has been above US$1.20 since early December and is near a record high on a trade-weighted basis. While the exchange rate has moderated since the last policy decision, any renewed gains would put downward pressure on inflation by cutting import costs. The ECB already says it’s monitoring the situation closely.

Another area of focus will be the pace of bond-buying. The euro area remains deeply dependent on the ECB’s strategy of using purchases to cap yields, which curbs the cost of massive fiscal support.

The International Monetary Fund called on France and Germany this week to keep spending, echoing a frequently repeated call from Lagarde not to withdraw stimulus too soon.

The ECB has said it won’t use all of its emergency bond program if not needed, in a concession to more cautious members of the Governing Council at the previous policy decision. Most economists surveyed by Bloomberg say the central bank will ultimately spend the full amount, though it won’t need to top up the program again.

Lagarde may also address questions on the ECB’s strategy review, which is set to produce results this year on issues including the institution’s inflation target, and the role the central bank can play in combating climate change.