The Bank of Canada is adopting a positive tone on the outlook for the nation’s economy, choosing to look past a weak start to 2021 as vaccine efforts accelerate.

In a decision Wednesday from Ottawa, policy makers led by Governor Tiff Macklem said the economy remains on a two-year timeline to fully repair damage from the pandemic and doesn’t currently need additional support, even amid a wave of new COVID-19 cases and lockdowns.

The language effectively quashes speculation, at least for now, that the Bank of Canada could cut already historically low borrowing costs even further. Instead, officials said the extraordinary amount of stimulus already in the economy is appropriate and even raised the possibility of pulling back some of it as the recovery takes hold.

“In sum, there is clear reason to be more optimistic about the direction of the economy over medium term,” Macklem told reporters after the decision. “But we are not there yet. The resurgence in COVID-19 cases weighs heavily on the near-term economic outlook.” 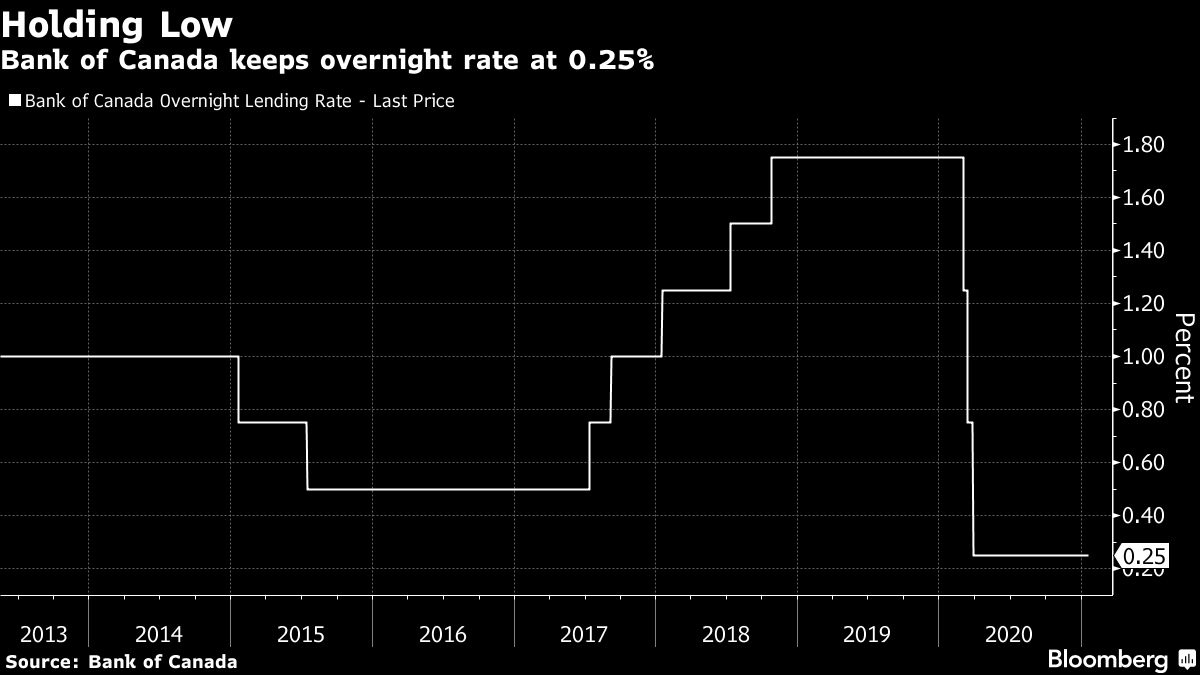 The bank held its overnight interest rate at 0.25 per cent, which is already a record low. Interest rates that commercial banks give to their prime customers are typically just over 2 percentage points above the policy rate. The bank reiterated Wednesday it will keep borrowing costs low until 2023.

In addition, the central bank has been purchasing financial assets, primarily Canadian government bonds, to suppress long-term interest rates. Officials on Wednesday said they will continue to do so at the current pace of at least C$4 billion a week.

But in perhaps the most significant addition to its policy statement, the central bank said it’s prepared to scale these purchases back as it becomes more confident the recovery has taken hold.

Macklem called the arrival of vaccines a “very promising development,” one that will support exports and business investment as progress is made toward broad immunity in Canada and abroad. Widespread vaccination would also prove a boon for household consumption.

One of the biggest changes to the bank’s key assumptions is the timeline for the vaccine. In October, the bank predicted the vaccine would be broadly available by mid-2022, but that has been moved forward to the end of 2021. As a result, the bank revised higher its growth estimate for next year to 4.8 per cent, from a 3.7 per cent projection in October. Growth in 2021 was revised down slightly to 4 per cent from an October estimate of 4.2 per cent, reflecting the weaker-than-expected start to the year.

“The bank’s more optimistic medium-term forecasts are the key takeaway,” Josh Nye, an economist at Royal Bank of Canada in Toronto, said in a report to investors.

At the same time, Macklem sought to ensure expectations don’t get too elevated.

A second wave of COVID-19 cases has forced officials to impose strict measures on businesses and social gatherings that the Bank of Canada is predicting will produce an economic contraction in the first quarter of this year. The nation’s recovery also risks being hampered by a strengthening currency and a pick-up in market interest rates.

At a press conference after the statement, Macklem said officials determined during the policy deliberations that it’s still too early to consider slowing the pace of asset purchases. He also highlighted how the bank’s forecasts come with a high degree of uncertainty and that the economy will continue to require extraordinary levels of stimulus for years to come. The bank does have options to add more stimulus if needed, Macklem said.

“In view of the near-term weakness and the protracted nature of the recovery, we concluded that the exceptional degree of monetary stimulus currently in place remains appropriate,” he said.

The tone in the statement was widely expected, though some analysts had been warning the central bank could be tempted to make a micro-rate-cut that would bring the policy rate closer to zero.

Macklem wouldn’t be drawn on whether Governing Council discussed such a cut at this week’s meeting, saying only a micro cut is one option available to the bank should it require additional stimulus.

“I never really bought into the mini-rate-cut idea as it doesn’t provide too much extra stimulus against the near-term headwinds the economy faces,” Simon Harvey, a foreign exchange market analyst at Monex Canada, said by email.

Policy makers also downplayed any worries that all this extraordinary stimulus could drive up inflation. In the statement, officials said economic slack is expected to weigh on price pressures.