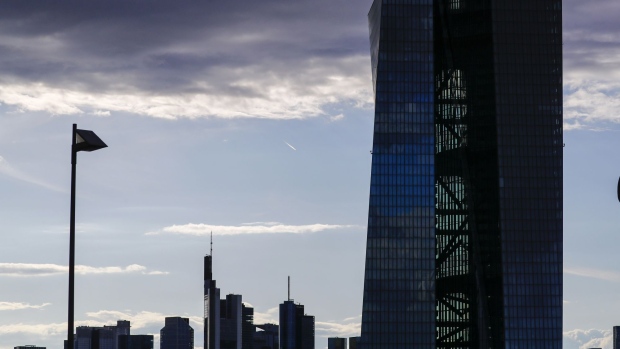 The European Central Bank (ECB) headquarters stands in Frankfurt, Germany, on Wednesday, April 29, 2020. The ECB's response to the coronavirus has calmed markets while setting it on a path that could test its commitment to the mission to keep prices stable. Photographer: Alex Kraus/Bloomberg , Bloomberg

European Central Bank officials have given up on the idea of a swift economic rebound from the pandemic and are ready to add stimulus again next month if new information suggests existing efforts aren’t enough.

Policy makers agreed at their April 30 meeting that a “V-shaped recovery could probably already be ruled out at this stage,” though their emergency asset purchases prevented the likelihood of a self-reinforcing downward spiral, according to an account of the virtual discussion.

“At the June meeting, more information would be available, including new Eurosystem staff macroeconomic projections,” the account showed. “The Governing Council would have to stand ready to adjust the Pandemic Emergency Purchase Program and potentially other instruments if it saw that the scale of the stimulus was falling short of what was needed.”

“The minutes from the European Central Bank’s last meeting are unusually clear. Most importantly, they indicate its bond buying program is likely to be increased in June. In addition, in thinly veiled language, the account also removes any doubt about the Governing Council’s determination to keep Italian government bond yields low.”

Policy makers decided at the meeting to ease the terms of their long-term loans to banks and introduced a new liquidity tool, but opted against expanding quantitative easing. Most economists expect the 750-billion euro (US$815 billion) emergency bond-buying program will be increased, perhaps as soon as the next policy meeting on June 4.

The ECB has pledged to buy more than a trillion euros of debt this year -- the most in its history -- using the pandemic program and an earlier one. The institution has led the European-level response, with most fiscal action coming only from national governments.

A concern was voiced in the meeting that such large-scale interventions in sovereign bond markets could give rise to “fiscal dominance’” -- encouraging irresponsible spending by governments.

Bank of England Governor Andrew Bailey recently pushed back against similar concerns even while acknowledging that his central bank’s policies are supporting U.K. government borrowing.

The Governing Council, according to the ECB report, agreed that “fiscal policy also needed to play an essential role.”

It may get its wish. German and French leaders finally proposed a 500 billion euro aid package this week that might ease some of the pressure, though it requires approval by all 27 European Union member states and would only kick in next year.

Philip Lane, the ECB’s chief economist, said later on Friday that central banks have to be more aggressive in dealing with shocks that depress inflation -- such as the current one -- than those that boost it.

He also said the institution hasn’t forgotten another key task it had planned for 2020 -- a reassessment of its overall policy strategy -- calling it a “high priority.”