The pandemic-induced shutdown of the economy has resulted in job loss or reduced work hours for 44 per cent of Canadian households, the Angus Reid Institute said Wednesday. Most of those who are out of work say their employers aren’t offering any emergency support.

And the layoffs are likely to continue. Confidence among small businesses dropped to a record low this month and half of firms expect full-time employment levels to be down over the next few months, according to a separate survey by the Canadian Federation of Independent Business. 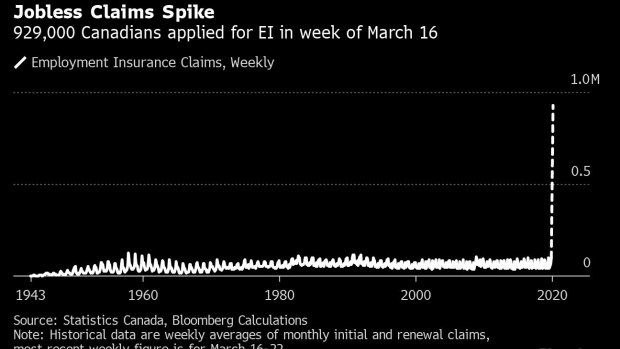 Both reports underscore the effects of a country falling into a sharp recession as the economy faces an uncertain period of industry shutdowns. Quebec and Ontario -- which account for about 57 per cent of the country’s output -- ordered non-essential businesses to close for two weeks in a bid to counter the coronavirus pandemic.

“While we really don’t know how long this will last, we do know the hit to GDP will be severe,” Royce Mendes, an economist with Canadian Imperial Bank of Commerce, said by email. “We fully expect the unemployment rate to spike to levels higher than even during the worst of the financial crisis.”

Industries including tourism and energy were already suffering before the provincial announcements Monday. Now with further business closures, the labor market is sure to see additional pain. Last week, almost one million Canadians applied for employment insurance. That’s almost 5 per cent of the national labor force and is far above any monthly -- let alone weekly -- tally in data back to the 1950s.

While many companies are closing their doors, others can remain open if they’re deemed essential or can make deliveries. Some grocery stores and pharmacies are even ramping up hiring to keep up with demand.

Still, the widespread employment cuts are hitting financially vulnerable people the hardest, according to the Angus Reid report. About 37 per cent of those surveyed who experienced a job loss in their household say they’re not equipped to handle even an extra $100 (US$69) in expenses over the next month.

Economists have been rushing to lower their forecasts for the Canadian economy as business and supply-chain disruptions take hold. The country’s largest banks now expect second-quarter gross domestic product to contract by the most in more than 50 years. The unemployment rate is expected to vault well past 10 per cent, from the near-record low of 5.6 per cent heading into the coronavirus crisis and the oil price war sparked by the breakdown of talks between Russia, Saudi Arabia and the rest of the OPEC+ group.

“The drop in service sector activity and the oil price shock, combined with ripples from slower global demand and supply-chain disruptions that will hit the industrial sector, means we are headed for a period of unprecedented softness in economic activity,” Royal Bank of Canada economists Craig Wright, Dawn Desjardins and Nathan Janzen said in a report to clients Tuesday.

While most economists expect growth to bounce back in the second half of the year, the big question is how long it will take to curb the spread of the pandemic and at what point normal activity can resume.