Former Deputy Prime Minister and Finance Minister John Manley said the Canadian economy needs to be weaned off its reliance on support from the federal government, but added to do so, it will require a bit of a “change in attitude."

“The economy can’t continue to be supported just by the massive outflow of cash from the federal government,” said Manley, senior advisor at Bennett Jones who was a Liberal politician for almost two decades, in an interview.

His comments come on the heels of a milestone for the labour force, as Statistics Canada revealed Friday that the country's employment rates have returned to pre-pandemic levels, after more than 157,100 positions were added in September. 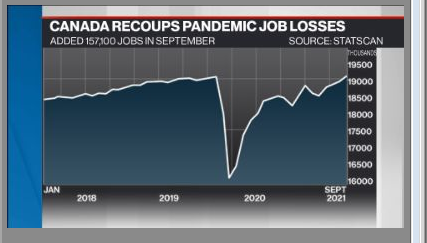 Manley said the headline numbers from the labour force survey are encouraging, but added he’s more concerned about what comes next.

“We need to see the economy growing on its own,” he said. “The government can’t do it all itself.”

“We need policies that are predictable and dependable that will encourage investment in Canada. That’s going to require a little bit of a change in attitude, because we already had trends before the pandemic where we’re seeing Canadian investment dollars flowing out of the country rather than staying within it.”

GETTING BACK TO NORMAL

When asked if he had a message for Ottawa on how best to manage the economic recovery, Manley said it’s crucial to communicate to the business community that Canada has an investor-friendly economy.

“The cheapest form of economic stimulus is business confidence,” he said. “End of discussion.

“The Canadian economy is the composite of millions and millions of discrete decisions that are made across the country on a daily basis, from the CEO of a bank down to the mom that’s deciding whether she can afford to buy a roast chicken for dinner for her family.”

It’s those decisions that determine the course of an economy, he said, and they’re all driven by confidence.

In addition to a self-sustaining economy, Manley said the vaccine passport is going to play an important role in the coming months and into next year.

Getting children vaccinated is also a crucial step, which he said could give parents the confidence to work outside of the house once again.